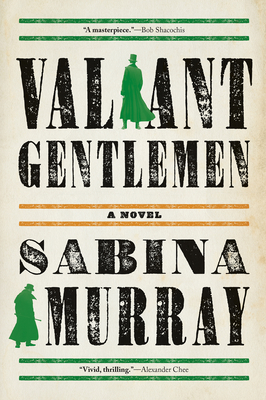 
Not On Our Shelves—Ships in 1-5 Days
Following her New York Times Editor's Choice collection of short stories Tales of the New World, historical fiction master Sabina Murray returns with an epic and bold novel of friendship and betrayal set across four continents and a 40-year time span In prose that is darkly humorous and alive with detail, Valiant Gentlemen reimagines the lives and intimate friendships of humanitarian and Irish patriot Roger Casement; his closest friend, Herbert Ward; and Ward's extraordinary wife, the Argentinian-American heiress Sarita Sanford. Valiant Gentlemen takes the reader on an intimate journey, from Ward and Casement's misadventurous youth in the Congo--where, among other things, they bore witness to an Irish whiskey heir's taste for cannibalism--to Ward's marriage to Sarita and their flourishing family life in France, to Casement's covert homosexuality and enduring nomadic lifestyle floating between his work across the African continent and involvement in Irish politics. When World War I breaks out, Casement and Ward's longstanding political differences finally come to a head and when Ward and his teenage sons leave to fight on the frontlines for England, Casement begins to work alongside the Germans to help free Ireland from British rule. What results is tragic and riveting, as both men are forced to confront notions of love and betrayal in the face of the vastly different tracks their lives have taken. Reminiscent of the work of Peter Carey and Michael Ondaatje, Valiant Gentlemen is a uniquely human account of some of early 20th century's larger historical figures from a "ravishing" (O Magazine) and "brilliant" (The Boston Globe) voice in fiction today.
Sabina Murray grew up in Australia and the Philippines and is currently a member of the MFA faculty at the University of Massachusetts, Amherst. She is the author of Tales of the New World, A Carnivore's Inquiry, Forgery, and The Caprices, which won the PEN/Faulkner Award for Fiction.