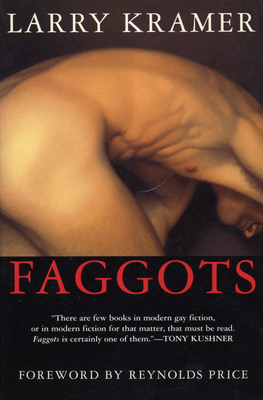 
Not On Our Shelves—Ships in 1-5 Days
Graphically sexual and one of the best-selling gay novels of all time, Faggots is the story of Fred Lemish, who at thirty-nine has built up his body into a fatless state of being in Great Shape. Finally he is ready to find Mr. Right. But from the Everhard Baths, to the Pines on Fire Island, to that place of myth and legend, The Meat Rack, Lemish is looking for his dream lover in all the wrong places. Faggots is a fierce satire of the gay ghetto and a touching story of one man's desperate search for permanence, commitment, and love.
Larry Kramer (1935-2020) was a writer and activist. In 1981, with five friends, he founded Gay Men's Health Crisis, and in 1987 he founded ACT UP. He is the author of The Normal Heart, which in 2014 was made into an Emmy-winning TV adaptation by HBO. His other plays include The Destiny of Me, Sissies' Scrapbook, and Just Say No, and his prose work includes The American People Volumes 1 & 2, the novel Faggots, two nonfiction books, and a screenplay, Women in Love. He was a recipient of the Award in Literature from the American Academy of Arts and Letters, the PEN/Laura Pels International Foundation for Theater Award for a Master American Dramatist, and the Isabelle Stevenson Award, presented by the Tony Awards Committee.