A Reasonable Response: Answers to Tough Questions on God, Christianity, and the Bible (Paperback) 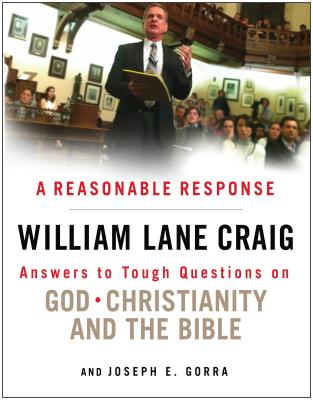 A Reasonable Response: Answers to Tough Questions on God, Christianity, and the Bible (Paperback)

Followers of Jesus need not fear hard questions or objections against Christian belief. In A Reasonable Response, renowned Christian philosopher and apologist William Lane Craig offers dozens of examples of how some of the most common challenges to Christian thought can be addressed, including:

Utilizing real questions submitted to his popular website ReasonableFaith.org, Dr. Craig models well-reasoned, skillful, and biblically informed interaction with his inquirers. A Reasonable Response goes beyond merely talking about apologetics; it shows it in action. With cowriter Joseph E. Gorra, this book also offers advice about envisioning and practicing the ministry of answering people’s questions through the local church, workplace, and in online environments.

Whether you're struggling to respond to tough objections or looking for answers to your own intellectual questions, A Reasonable Response will equip you with sound reasoning and biblical truth.

WILLIAM LANE CRAIG is a Research Professor of Philosophy at Talbot School of Theology in La Mirada, California. He earned a doctorate in philosophy at the University of Birmingham, England, and a doctorate in theology from the Ludwig-Maximilians-Universitat Munchen, Germany, where he was for two years a Fellow of the Alexander von Humboldt-Stiftung. Prior to his appointment at Talbot he spent seven years at the Higher Institute of Philosophy of the Katholike Universiteit Leuven, Belgium. He has authored or edited over forty books, including The Kalam Cosmological Argument; Assessing the New Testament Evidence for the Historicity of the Resurrection of Jesus; Divine Foreknowledge and Human Freedom; Theism, Atheism, and Big Bang Cosmology and God, Time, and Eternity, as well as over 150 articles in professional publications of philosophy and theology, including The Journal of Philosophy, New Testament Studies, Journal for the Study of the New Testament, American Philosophical Quarterly, Philosophical Studies, Philosophy, and British Journal for Philosophy of Science. His website is www.reasonablefaith.org.

JOSEPH E. GORRA is engaged in content development and research, editing, and publicity for Biola University¿s graduate program in Christian apologetics, the Evangelical Philosophical Society, and is a tutor for Vineyard Bible Institute. He is also the founder and director of Veritas Life Center, a religious nonprofit devoted to translating and transmitting the Christian tradition as a knowledge and wisdom tradition for flourishing well (www.VeritasLifeCenter.org). Twitter: @GorraResearch.
"

: In the lengthy introduction to A REASONABLE RESPONSE, Joseph Gorra writes, "I think that the key to victorious Christian living is not to have all your questions answered— which is probably impossible in a finite lifetime—but to learn to live successfully with unanswered questions. The key is to prevent unanswered questions from becoming destructive doubts." A REASONABLE RESPONSE is a collection of letters from individuals asking William Lane Craig questions and his responses to those questions. Sometimes the responses are answers. Other times they are re-directions to what is the real question or the more important questions. In both cases, Craig's breadth of knowledge is remarkable and his defense of the Christian faith solid.

This is a lengthy book (over 400 pages in my version), and it is structured to not be necessarily read straight through from beginning to end. In fact, it lends itself more to browsing the table of contents and finding topics of personal interest. If you have not read William Lane Craig or seen his debates, He is a brilliant man. Be aware that if you do not have a strong grounding in philosophy, syllogisms, and the advanced mechanics of how arguments work; the first third of the book might not mean much to you. I admit much of it was over my head. Once you get past the "knowing and believing what is real" section, the questions and answers become easier to follow for the average reader who did not major in philosophy.

Craig tackles all of the tough questions from the existence of God, the problem of evil (several times), origins of the universe, atheism, scientism, homosexuality, morals, Jesus' resurrection, etc. At the beginning of each section, Gorra includes lists of suggested readings divided into beginner, intermediate, and advanced. It is telling that several of the letters begin with the writer stating that they are atheist, but that they respect Craig's work. Craig is not one to mince words. If someone has not done their homework or simply has shoddy thinking, he tells them so up front. He always goes on to explain and address their questions piece by piece.

One of my favorite responses is in regards to Stephen Hawking's book - "The answer to your question, Matthew—'how can physicists make these statements?'—was given long ago by Albert Einstein, when he remarked, 'The man of science is a poor philosopher.' Hawking and Mlodinow’s book bears witness to Einstein’s sagacity."