An Edible History of Humanity (Paperback) 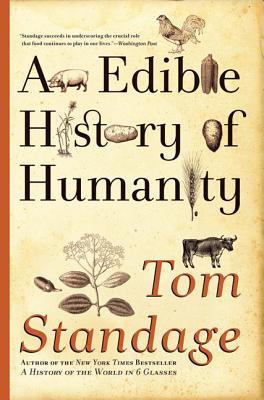 An Edible History of Humanity (Paperback)

“Tom Standage's An Edible History of Humanity is filled with remarkable and intriguing facts about the history of food in human civilization. It will make you hungry just reading it!”
— Jerry Fieldsted, Windows on the World-Books & Art, Mariposa, CA

The bestselling author of A History of the World in 6 Glasses charts the enlightening history of humanity through the foods we eat.

More than simply sustenance, food historically has been a kind of technology, changing the course of human progress by helping to build empires, promote industrialization, and decide the outcomes of wars. Tom Standage draws on archaeology, anthropology, and economics to reveal how food has helped shape and transform societies around the world, from the emergence of farming in China by 7500 b.c. to the use of sugar cane and corn to make ethanol today. An Edible History of Humanity is a fully satisfying account of human history.

Tom Standage is deputy editor of the Economist and the author of six previous history books, including Writing on the Wall, the New York Times bestsellers A History of the World in 6 Glasses and An Edible History of Humanity, and The Victorian Internet, a history of the telegraph. His writing has also appeared in the New York Times, the Guardian, Wired, and other publications. Standage holds a degree in engineering and computer science from Oxford University. He lives in London. @TomStandage

"Standage succeeds in underscoring the crucial role that food continues to play in our lives." - Washington Post

"The emphasis on food as a cultural catalyst differentiates Standage from Michael Pollan. With Standage...it's not just one food lifting and guiding history, but what Adam Smith might have called the "invisible fork" of food economics." - New Scientist

"Standage's examples are pretty powerful: In his view of the world, the British lost the Revolutionary War in large part because they failed to provide adequate food for their troops; the Soviet Union collapsed in 1991 because the regime could not feed its people; and the reason we say someone is a family's "breadwinner" is because of food's practically ancient association with wealth." - Gourmet

"An extraordinary and well-told story, a much neglected dimension of history." - Financial Times

"Cogent, informative and insightful. An intense briefing on the making of our world from the vantage point of food history." - Kirkus