A Plan for the People: Nelson Mandela's Hope for His Nation (Hardcover) 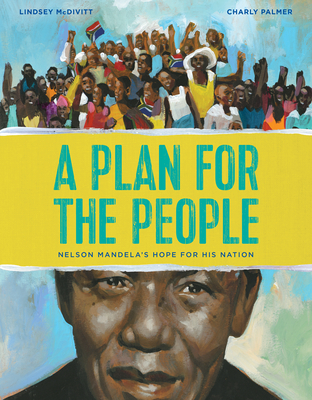 A Plan for the People: Nelson Mandela's Hope for His Nation (Hardcover)

As Nelson Mandela lived and worked under the unjust system of apartheid, his desire for freedom grew. South Africa separated people by races, oppressing the country's non-white citizens with abusive laws and cruel restrictions. Every day filled Mandela with grief and anger. But he also had hope--hope for a nation that belonged to everyone who lived in it.

From his work with the African National Congress, to his imprisonment on Robben Island, to his extraordinary rise to the presidency, Nelson Mandela was a rallying force against injustice. This stirring biography explores Mandela's long fight for equality and the courage that propelled him through decades of struggle. Illustrated in the bold, bright colors of South Africa, A Plan for the People captures the spirit of a leader beloved around the world.

Lindsey McDivitt is the author of Nature's Friend: The Gwen Frostic Story and Truth and Honor: The President Ford Story (both Sleeping Bear). She has written extensively about ageism and the importance of older role models in picture books. Lindsey lives in St. Paul, Minnesota. Follow her on Twitter @AisforAging or visit her website at lindseymcdivitt.com. Charly Palmer is an acclaimed fine artist, graphic designer, and illustrator. He received the Coretta Scott King-John Steptoe New Talent Illustrator Award for Mama Africa! How Miriam Makeba Spread Hope with Her Song (FSG). His other books include The Teachers March! (Calkins Creek), My Rainy Day Rocket Ship (Simon & Schuster), and I Can Write the World (Six Foot). His fine art explores racism, black identity, and activism, and his work has been commissioned for Time magazine, John Legend's album Bigger Love, and many other high-profile clients. Charly lives and works in Atlanta, Georgia. Follow Charly on Instagram @charlylpalmer or visit his website at charlypalmer.com.