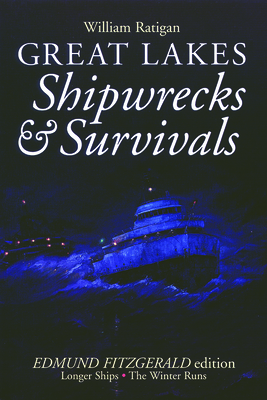 
Backordered
In this breathtaking chronicle of the most spectacular shipwrecks and survivals on the Great Lakes, William Ratigan re-creates vivid scenes of high courage and screaming panic from which no reader can turn away. Included in this striking catalog of catastrophes and Flying Dutchmen are the magnificent excursion liner Eastland, which capsized at her pier in the Chicago River, drowning 835 people within clutching distance of busy downtown streets; the shipwrecked steel freighter Mataafa, which dumped its crew into freezing waters while the snowbound town of Duluth looked on; the dark Sunday in November 1913 when Lake Huron swallowed eight long ships without a man surviving to tell the tale; and the bitter November of 1958 when the Bradley went down in Lake Michigan during one of the greatest killer storms on the freshwater seas. An entire section is dedicated to the wreck of the Edmund Fitzgerald -- the most famous maritime loss in modern times -- in Lake Superior in 1975. Chilling watercolor illustrations, photographs, maps, and news clippings accentuate Ratigan's compelling and dramatic storytelling. Sailors, historians, and general readers alike will be swept away by these unforgettable tales of tragedy and heroism.