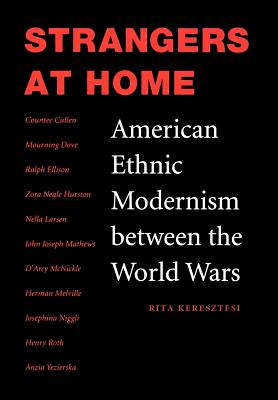 
Not On Our Shelves—Ships in 1-5 Days
(This book cannot be returned.)
Strangers at Home reframes the way we conceive of the modernist literature that appeared in the period between the two world wars. This provocative work shows that a body of texts written by ethnic writers during this period poses a challenge to conventional notions of America and American modernism. By engaging with modernist literary studies from the perspectives of minority discourse, postcolonial studies, and postmodern theory, Rita Keresztesi questions the validity of modernism's claim to the neutrality of culture. She argues that literary modernism grew out of a prejudiced, racially biased, and often xenophobic historical context that necessitated a politically conservative and narrow definition of modernism in America. With the changing racial, ethnic, and cultural makeup of the nation during the interwar era, literary modernism also changed its form and content. Contesting traditional notions of literary modernism, Keresztesi examines American modernism from an ethnic perspective in the works of Harlem Renaissance, immigrant, and Native American writers. She discusses such authors as Countee Cullen, Nella Larsen, Zora Neale Hurston, Anzia Yezierska, Henry Roth, Josephina Niggli, Mourning Dove, D’Arcy McNickle, and John Joseph Mathews, among others. Strangers at Home makes a persuasive argument for expanding our understanding of the writers themselves as well as the concept of modernism as it is currently defined.
Rita Keresztesi is an assistant professor of English at the University of Oklahoma.