I'm the Biggest Thing in the Ocean! (Hardcover) 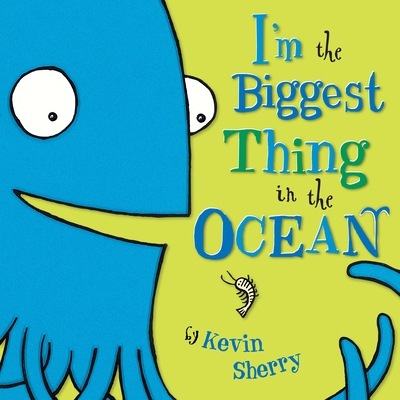 I'm the Biggest Thing in the Ocean! (Hardcover)


Not On Our Shelves—Ships in 1-5 Days
When a giant squid takes inventory of all of the creatures in the ocean, he realizes that he's way bigger than most of them! Of course, there are bigger things lurking around . . . but maybe this giant squid with a giant touch of hubris doesn't really care?

First-time author-illustrator Kevin Sherry is sure to garner fans of all sizes for his perfect-for-preschool read-aloud with simple text, bold and delightful collage art, and a lovable squid whose spirit just cannot be crushed.

Choking Hazard - Small parts. Not for children under 3 years.

Kevin Sherry is an artist, designer, and the cofounder of SquidFire, an online apparel company which features his unique wearable art. Kevin Sherry lives in Baltimore, Maryland, conveniently close to his deep sea friends.
"Waves of exuberance flow out of this crowd-pleaser, in which a squid proudly points out how much bigger it is than any shrimp, clam, octopus or fish in the neighborhood."

“Sherry renders his hero and habitat in bright colors and bold, simple shapes that will be surefire eye magnets for preschoolers….”