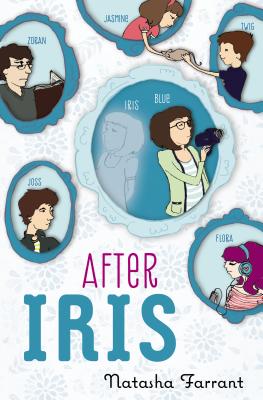 Blue Gadsby’s twin sister, Iris, died three years ago and her family has never been the same. Her histrionic older sister, Flora, changes her hair color daily; her younger siblings, Jasmine and Twig, are completely obsessed with their pet rats; and both of her parents spend weeks away from home–and each other. Enter Zoran the Bosnian male au pair and Joss the troublemaking boy next door, and life for the Gadsby family takes a turn for the even more chaotic. Blue poignantly captures her family’s trials and tribulations from fragmented to fully dysfunctional to ultimately reunited, in a sequence of film transcripts and diary entries that will make you cry, laugh, and give thanks for the gift of families.

With the charm of The Penderwicks and the poignancy of When You Reach Me, Natasha Farrant's After Iris is a story that will stay with readers long after the last page.

Natasha Farrant is a literary scout specializing in children’s and young adult literature, and she has published three novels in the United Kingdom. This is her debut middle grade and her first book published in the United States.
Now a Kirkus Reviews Best Middle Grade Book, a 2014 Bank Street Best Book of the Year, and a CCBC Choice!

"At once funny and painful and tumultuous, with a deus-ex-machina ending that will make readers want to cheer." - The Wall Street Journal

"Farrant has created a wounded, flawed cast of characters and depicts them with great compassion. The situations are a mix of hilariously funny and poignantly touching...An uplifting, memorable read." - Kirkus Reviews, starred review

"A realistic slice of life that bubbles with wit and charm." - School Library Journal

"The grand finale...is one of the best Christmas scenes ever." - The Horn Book

"[Natasha Farrant] balances Blue’s growth with wry humor and light moments...Blue’s struggles are handled with honesty, and she makes a rewarding journey from observing her life to living it again and accepting what she has lost." - Publishers Weekly

"Bluebell is poignantly marked out as the observer in a crowd of actors...readers who enjoy quirky family stories may want to follow the Gadsbys’ journey to reconciliation." - The Bulletin of the Center for Children's Books