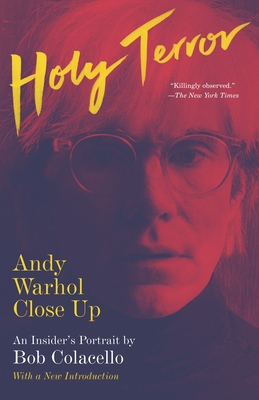 
Not On Our Shelves—Ships in 1-5 Days
In the 1960s, Andy Warhol’s paintings redefined modern art. His films provoked heated controversy, and his Factory was a hangout for the avant-garde. In the 1970s, after Valerie Solanas’s attempt on his life, Warhol become more entrepreneurial, aligning himself with the rich and famous. Bob Colacello, the editor of Warhol’s Interview magazine, spent that decade by Andy’s side as employee, collaborator, wingman, and confidante.

In these pages, Colacello takes us there with Andy: into the Factory office, into Studio 54, into wild celebrity-studded parties, and into the early-morning phone calls where the mysterious artist was at his most honest and vulnerable. Colacello gives us, as no one else can, a riveting portrait of this extraordinary man: brilliant, controlling, shy, insecure, and immeasurably influential. When Holy Terror was first published in 1990, it was hailed as the best of the Warhol accounts. Now, some two decades later, this portrayal retains its hold on readers—as does Andy’s timeless power to fascinate, galvanize, and move us.
Bob Colacello ran Interview magazine from 1971 to 1983. Since then he has been a contributing editor at Vanity Fair. The first volume of his Reagan biography, Ronnie and Nancy: Their Path To the White House, 1911-1980 was published in 2004 and a collection of his photographs of the Factory years, Bob Colacello’s Out was published in 2007. He lives on Long Island.
“Killingly observed. Dissecting Warhol with an amiable but sharp wit, Mr. Colacello also manages to give him more of a human dimension than anyone else.” —The New York Times

“By far the best of Andy Warhol’s portraits, including his own.” —George Plimpton

"A must-read for anyone who wants to understand the genius master-minding of fame, the artistic value in what was derided as commercial, and the iconic personalities, featuring Sylvia Miles, Paul Morrissey, Fran Lebowitz, Brigid Berlin, Mick Jagger, Diane von Furstenberg, and Paulette Goddard, among the many names dropped in these pages, Holy Terror is a fascinating record of an art era American Dream." —The Huffington Post

"An entertaining, hilarious book. . . . Widely regarded as the essential look at life inside the Warhol parade." —Flavorwire

“This is a first-rate sweeping memoir of an astonishing cultural phenomenon. . . . Gossipy, gutsy, and gripping . . . A work of startling immediacy and convincing honesty.” —Kirkus Reviews