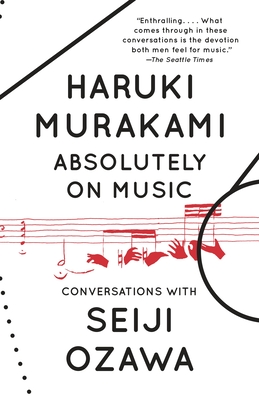 “To sit down with Absolutely on Music is to sit down with two maestros -- acclaimed writer Haruki Murakami, in a way you've never experienced him before, and famed conductor Seiji Ozawa who lives and breathes classical music. This book is the result of several conversations over two years between the two friends that focused on the music they both love, on writing, and on how the two connect. Written by Murakami in a question-and-answer format, Absolutely on Music offers note-by-note talks about classical music and about Ozawa's and Murakami's lives and the intricacies of both. Readers will hear the music!”
— Terry Tazioli (M), University Book Store, Seattle, WA

A deeply personal, intimate conversation about music and writing between the internationally acclaimed, best-selling author and the former conductor of the Boston Symphony Orchestra.

In Absolutely on Music, internationally Haruki Murakami sits down with his friend Seiji Ozawa, the revered former conductor of the Boston Symphony Orchestra, for a series of conversations on their shared passion: music. Over the course of two years, Murakami and Ozawa discuss everything from Brahms to Beethoven, from Leonard Bernstein to Glenn Gould, from Bartók to Mahler, and from pop-up orchestras to opera. They listen to and dissect recordings of some of their favorite performances, and Murakami questions Ozawa about his career conducting orchestras around the world.

Culminating in Murakami’s ten-day visit to the banks of Lake Geneva to observe Ozawa’s retreat for young musicians, the book is interspersed with ruminations on record collecting, jazz clubs, orchestra halls, film scores, and much more. A deep reflection on the essential nature of both music and writing, Absolutely on Music is an unprecedented glimpse into the minds of two maestros.
Haruki Murakami was born in Kyoto in 1949 and now lives near Tokyo. His work has been translated into more than fifty languages, and the most recent of his many international honors is the Hans Christian Andersen Literature Award, whose previous recipients include J. K. Rowling, Isabel Allende, and Salman Rushdie.
www.harukimurakami.com

Seiji Ozawa served as music director of the Boston Symphony Orchestra for twenty-nine years, and was music director of the Toronto Symphony Orchestra, the San Francisco Symphony, the Chicago Symphony Orchestra’s Ravinia Festival, and Wiener Staatsoper. With Kazuyoshi Akiyama, he formed the Saito Kinen Orchestra and is the director of the Seiji Ozawa Matsumoto Festival. Ozawa has been deeply involved in musical education through his work with the Tanglewood Music Center Orchestra, the Ozawa International Chamber Music Academy Okushiga, the Seiji Ozawa International Academy Switzerland, and as founder of the Seiji Ozawa Music Academy Opera Project, organizations which provide opportunities to outstanding students in Asia and Europe. Among his many honors, Ozawa has been awarded France’s Officier de la Légion d’Honneur, the Japanese Order of Culture, a Kennedy Center Honor, and a Grammy for Best Opera Recording.
“A fascinating collection of conversations. . . . The unpretentious and engaging dialogues between passionate artists—the bewitching writer in whose novels music plays a prominent part and the indefatigable, amiable conductor—make the pages fly.” —The New York Times

“Highly entertaining. . . . A book that opens a new side of [Murakami’s] authorial persona.” —San Francisco Chronicle

“Absolutely on Music is an unprecedented treasure. . . . Talking about music is like dancing about architecture, it’s often said, but what joy to watch these two friends dance.” —The Guardian

“Enthralling. . . . What comes through in these conversations is the devotion both men feel for music; the degree to which every detail of a work matters to them.” —The Seattle Times

“An enviable word picture of the artistic life of two men at the top of their professional games. . . . [Absolutely on Music] offers so much that bears re-reading and considering.” —The Washington Times

“Refreshingly honest and enthusiastic, a mental sampler from both the writer and the musician.” —The Buffalo News

“The book shines as a deep exploration into how a conductor does his job and how performer personalities, logistical factors, and mundane bureaucracies can change an orchestra’s sound.” —The New Republic

“Intriguing insights about the nature of music. . . . In some ways, these conversations are High Fidelity for classical music fans.” —Publishers Weekly

“A strange and delightful book. . . . [Murakami] describes music with rich and suggestive metaphors and images that capture something essential about the spirit of the music.” —The Christian Science Monitor