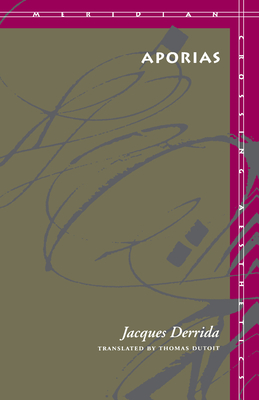 That is the question asked, explored, and analyzed in Jacques Derrida's new book. Is my death possible? How is this question to be understood? How and by whom can it be asked, can it be quoted, can it be an appropriate question, and can it be asked in the appropriate moment, the moment of my death? One of the aporetic experiences touched upon in this seminal essay is the impossible, yet unavoidable experience that my death can never subject to an experience that would be properly mine, that I can have, and account for, yet that there is, at the same time, nothing closer to me and more properly mine than my death.

This book bears a special significance because in it Derrida focuses on an issue that has informed the whole of his work up to the present. For the last thirty years, Derrida has repeatedly, in various contexts and various ways, broached the question of aporia. Making it his central concern here Derrida stakes out a new frontier, at which the debate with his work must take place from now on: the debate about the aporia between singularity and generality, about the national, linguistic, and cultural specificity of experience and the trans-national, trans-cultural law that protects this specificity of experience and of the necessity to continue working in the tradition of critique and of the idea of critique, yet the corresponding necessity to transcend it without compromising it; the aporetical obligation to host the foreigner and the alien and yet to respect him, her, or it as foreign.

The foreign or the foreigner has always been considered a figure of death, and death a figure of the foreign. How this figure has been treated in the analytic of death in Heidegger's Being in Time is explored by Derrida in analytical tour de force that will not fail to set new standards for the discussion of Heidegger and for dealing with philosophical texts, with their limits and their aporias. The detailed discussion of the theoretical presuppositions of recent cultural histories of death (Ari's, for example) and of psychological theorizations of death (including Freud's) broaden the scope of Derrida's investigation and indicate the impact of the aporia of my death for any possible theory.

"My death--is it possible?" That is the question asked, explored, and analyzed in Jacques Derrida's new book. Focusing on an issue that has informed his work for the last 30 years, Derrida stakes out a new frontier, at which the debate with his work must take place from now on.