Beyond the Great Wall: Urban Form and Transformation on the Chinese Frontiers (Hardcover) 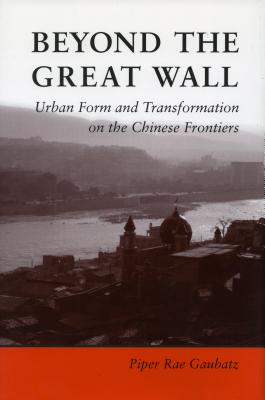 Beyond the Great Wall: Urban Form and Transformation on the Chinese Frontiers (Hardcover)


Special Order—Subject to Availability
This study of cities on China's inland frontiers from ancient times to the present integrates the approaches of urban geography, cultural historical geography, and frontier studies to assess the form and function of cities on the Chinese frontiers. It explores the nature of urbanism on Chinese frontiers, and presents comparative case studies of a group of Chinese frontier cities. The author explores how the urban ideals and practices of eastern China were adapted to the natural and human conditions of the frontier regions, and in the process she analyzes the interaction of Chinese and non-Chinese peoples in frontier cities. She shows how a distinctive frontier urban form emerged, which, while adhering mainly to eastern Chinese practice, also incorporated a certain degree of diversity, especially in monumental and vernacular architecture.

"Not only specialists, but anyone with an interest in a wide range of areas (China, Central Asia, South and Southeast Asia) and disciplines (geography, anthropology, history, urban studies) will benefit greatly from this enormously stimulating book. Specialists will welcome the breadth of the author's inquiry, the challenging theses put forward, and the remarkable collection of new material, based on fieldwork in remote areas of China rarely studied by Westerners. General readers will be delighted by the rich array of illustrations and maps that illuminate the author's arguments and provide a fascinating introduction to China's multicultural frontier."—Dru C. Gladney, University of Hawaii

"Illustrated with excellent diagrammatic maps and photographs, Gaubatz's interdisciplinary study examines the foundation, historical development, and distinctive features of five cities on China's inner Asian and southwest frontier. . . . This is an important contribution to the study of Chinese cities and China's frontiers."—Choice