Of Hospitality (Cultural Memory in the Present) (Paperback) 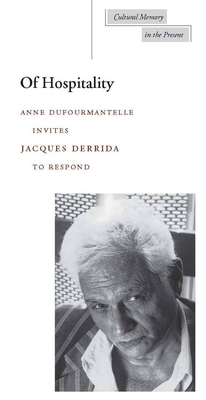 Of Hospitality (Cultural Memory in the Present) (Paperback)


Not On Our Shelves—Ships in 1-5 Days
Consisting of two texts on facing pages, the form of this presentation of two 1996 lectures on hospitality by Jacques Derrida is a self-conscious enactment of its content. Invitation by Anne Dufourmantelle appears on the left (an invitation that of course originates a response), clarifying and inflecting Derrida's "response" on the right.

"Of Hospitality provides us with a glimpse of Jacques Derrida as not only the brilliant thinker and writer readers have long admired but as the masterful lecturer and pedagogue his students have long known. . . . Of Hospitality should find a welcome audience not only among faithful readers of Derrida but among all those who are open enough to hear the knock at their borders or their doors."—L'Esprit Créateur

"Both lectures [in the book] deserve credit not only for representing a significant step in Derrida's reflection on ethics and politics but also for prompting us to begin our own deconstructive work and rethink our identity."—Symploke