Two Ways to Count to Ten: A Liberian Folktale (Paperback) 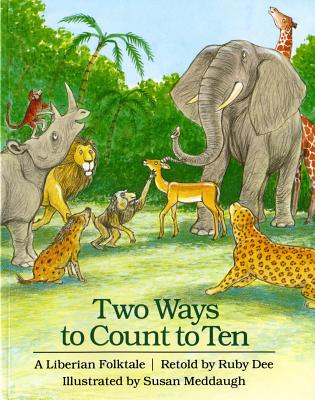 Two Ways to Count to Ten: A Liberian Folktale (Paperback)

Award-winning actress and civil rights activist Ruby Dee retells a timeless tale of strength and leadership in Two Ways to Count to Ten: A Liberian Folktale, illustrated by Susan Meddaugh.

When the Leopard, king of all the jungle animals, declares the time has come for a successor to marry his daughter and wear the crown, the bravest beasts gather for a competition. The creature capable of throwing a spear high enough in the air for him to count to ten before it reaches the ground will be declared the jungle’s prince.

After many of the strongest animals fail, an antelope steps forth to take the king’s challenge, only to be ridiculed for his physical weakness. But the antelope possesses a different kind of strength—one that’s a perfect quality for leadership.

Ruby Dee (1922-2014) was an actress and social activist. She was the author of the children's book Two Ways to Count to Ten: A Liberian Folktale.

Susan Meddaugh is the author/illustrator of the Martha Speaks children's books. She also provided the art for Ruby Dee's Two Ways to Count to Ten: A Liberian Folktale.

“King Leopard is wise enough to plan for a successor: 'I must seek out the cleverest beast in our jungle. I must find one who is wise enough to rule well.' He plans a contest; the winner is to be named a prince and marry his daughter. Contestants must throw Leopard's spear up in the air and count to ten before it comes to earth again...The story is a strong one and will be an effective read-aloud.” —Booklist

“The noted actress retells this lively, well-paced, and involving version of a Liberian folktale. Meddaugh's color-pencil and water-color paintings suit the text well. Readers and listeners of all ages will find this an irresistibly satisfying tale.” —Publishers Weekly

“A clever tale about the jungle beasts learning to count, showing once again that being strong is not the same as being smart.” —The New York Times