What Are You?: Voices of Mixed-Race Young People (Hardcover) 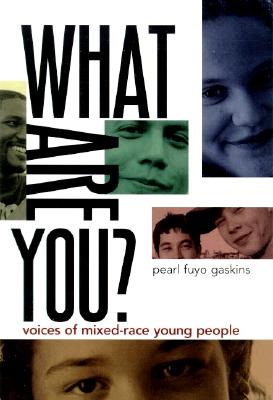 What Are You?: Voices of Mixed-Race Young People (Hardcover)

In the past three decades, the number of interracial marriages in the United States has increased by more than 800 percent. Now over four million children and teenagers do not identify themselves as being just one race or another.

Here is a book that allows these young people to speak in their own voices about their own lives.

What Are You? is based on the interviews the author has made over the past two years with mixed-race young people around the country. These fresh voices explore issues and topics such as dating, families, and the double prejudice and double insight that come from being mixed, but not mixed-up.

Pearl Fuyo Gaskins is an award-winning journalist whose articles frequently appear in "Scholastic Choices" magazine. The child of an interracial marriage, she wrote What Are You? "to be a forum for mixed-race young people to share their experiences and validate their feelings." This is her first book. Ms. Gaskins grew up in California, lived in Hawaii, and now resides with her husband in West Orange, New Jersey.