Lewis and Clark and Me: A Dog's Tale (Hardcover) 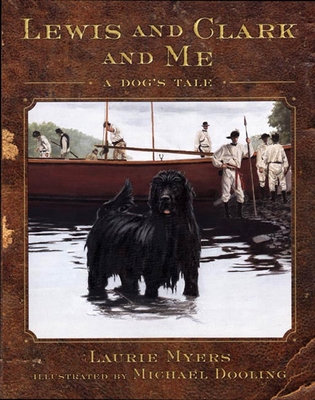 Lewis and Clark and Me: A Dog's Tale (Hardcover)

A dog's account of one of the most extraordinary expeditions of all time.

"Dog and man can fit together like no others do. Lewis and I had that fit....

How did we get that close? I think the wilderness had something to do with it. Lewis and I would have been close anywhere, but the wilderness brought out the best in both of us. We were made for that territory."

In 1803, Meriwether Lewis and William Clark set off on a journey to explore the vast territory of the United States west of the Mississippi River. Accompanying Lewis and Clark and their team of explorers through this uncharted wilderness was Lewis' dog Seaman.

Lewis and Clark and Me is Seaman's story. From his first meeting with Lewis, to being mistaken for a bear by Indians who had never seen such a large dog, to his encounters with wild animals both familiar and unfamiliar, Seaman's tales are filled with the joys of companionship and the tingling excitement of adventure.

Seaman's stories are based information provided in the explorers' journals. The book include many of these direct quotes from the original text as well as a detailed map showing the highlights of this amazing expedition.

Michael Dooling has illustrated numerous books for children. Among them are George Washington: A Picture Book Biography by James Cross Giblin, O. Henry's The Gift of the Magi and Other Stories, and Lewis and Clark and Me by Laurie Myers. He lives in Audubon, New Jersey, with his wife, Jane, and her daughters, Rachel and Lisa.
"Excerpts from Lewis's journals close each chapter, supplying the historical basis for the dog's adventures. Handsome silhouettes ornament the chapter openers, while numerous oil paintings enliven the pages." - Publishers Weekly