Chinese Lessons: Five Classmates and the Story of the New China (Paperback) 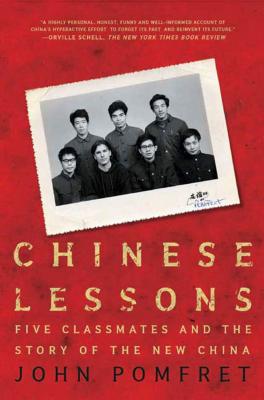 Chinese Lessons: Five Classmates and the Story of the New China (Paperback)

As a twenty-year-old exchange student from Stanford University, John Pomfret spent a year at Nanjing University in China. His fellow classmates were among those who survived the twin tragedies of Mao's rule—the Great Leap Forward and the Cultural Revolution—and whose success in government and private industry today are shaping China's future. Pomfret went on to a career in journalism, spending the bulk of his time in China. After attending the twentieth reunion of his class, he decided to reacquaint himself with some of his classmates. Chinese Lessons is their story and his own.

Beginning with Pomfret's first days in China, Chinese Lessons takes us back to the often torturous paths that brought together the Nanjing University History Class of 1982. One classmate's father was killed during the Cultural Revolution for the crime of being an intellectual; another classmate labored in the fields for years rather than agree to a Party-arranged marriage; a third was forced to publicly denounce and humiliate her father. As we watch Pomfret and his classmates begin to make their lives as adults, we see as never before the human cost and triumph of China's transition from near-feudal communism to first-world capitalism.

John Pomfret, a finalist for the Pulitzer Prize, served as a correspondent for the Washington Post for two decades, covering wars, revolutions, and China. His recent book, The Beautiful Country and the Middle Kingdom, won the Arthur Ross Book Award from the Council on Foreign Relations. The recipient of numerous journalism awards, he lives with his wife and three children in Berkeley, CA.

“In this intimate and revealing book, John Pomfret shows why he is one of the great China correspondents of his generation: He has never held himself at a distance, but has plunged in, with vigor and an open mind. His approach to China has no tint of romanticism or awe; the lives he discovers and the stories he tells, including his own, are unvarnished, unexpected, and riveting.” —Steve Coll, author of the Pulitzer Prize-winning Ghost Wars

“Chinese Lessons is an extraordinary book. Through telling the intimate stories of his former classmates, John Pomfret reveals a contemporary China where many individual lives have been thwarted and twisted. This is a book full of insights, honesty, and compassion. It touched me deeply.” —Ha Jin, author of Waiting

“John Pomfret has written a brilliant, insightful book describing the dark side and human cost of the 'Chinese economic miracle.' His feel for China, based on years of living there, his fluency in Chinese, and his reporting genius cut through the sham and spin.” —James R. Lilley, former U.S. Ambassador to China and chief of the American Mission in Taiwan