A Peace to End All Peace: The Fall of the Ottoman Empire and the Creation of the Modern Middle East (Paperback) 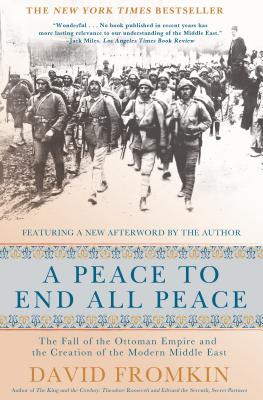 A Peace to End All Peace: The Fall of the Ottoman Empire and the Creation of the Modern Middle East (Paperback)

Published with a new afterword from the author—the classic, bestselling account of how the modern Middle East was created

The Middle East has long been a region of rival religions, ideologies, nationalisms, and ambitions. All of these conflicts—including the hostilities between Arabs and Israelis, and the violent challenges posed by Iraq's competing sects—are rooted in the region's political inheritance: the arrangements, unities, and divisions imposed by the Allies after the First World War.

In A Peace to End All Peace, David Fromkin reveals how and why the Allies drew lines on an empty map that remade the geography and politics of the Middle East. Focusing on the formative years of 1914 to 1922, when all seemed possible, he delivers in this sweeping and magisterial book the definitive account of this defining time, showing how the choices narrowed and the Middle East began along a road that led to the conflicts and confusion that continue to this day.

A new afterword from Fromkin, written for this edition of the book, includes his invaluable, updated assessment of this region of the world today, and on what this history has to teach us.

David Fromkin (1932-2017) was a professor at Boston University and the author of several acclaimed books of nonfiction, including A Peace to End All Peace, The King and the Cowboy: Theodore Roosevelt and Edward the Seventh, Secret Partners. He lived in New York City.

“[It] achieves an ideal of historical writing: its absorbing narrative not only recounts past events but offers a useful way to think about them....The book demands close attention and repays it. Much of the information here was not available until recent decades, and almost every page brings us news about a past that troubles the present.” —Naomi Bliven, The New Yorker

“One of the first books to take an effective panoramic view of what was happening, not only in Egypt, Palestine, Turkey, and the Arab regions of Asia but also in Afghanistan and central Asia....Readers will come away from A Peace to End All Peace not only enlightened but challenged--challenged in a way that is brought home by the irony of the title.” —The New York Times Book Review