My Life as a Cartoonist (The My Life series #3) (Hardcover) 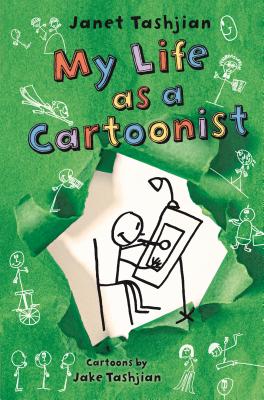 My Life as a Cartoonist (The My Life series #3) (Hardcover)

This is book number 3 in the The My Life series series.

In Book Three of the popular "My Life . . ." series by Janet Tashjian, Derek Fallon's plan to help out a new classmate backfires miserably

There's a new kid in Derek Fallon's class. His name is Umberto and he uses a wheelchair. Derek's family is still fostering Frank the monkey, and Derek thinks it would be great to train Frank to assist Umberto. But Derek quickly realizes that Umberto is definitely not looking for any help. Derek soon becomes the butt of Umberto's jokes. On top of that, Umberto starts stealing Derek's cartoon ideas and claiming them as his own. How did Derek get himself into this mess, and how can he find a way out before he is the laughingstock of school? The answer may very well be his cartoon strip—SUPER FRANK!

My Life as a Cartoonist features illustrations by Janet Tashjian's son, Jake Tashjian .

“Give this to kids who think they don't like reading. It might change their minds.” —Booklist, starred review on My Life as a Book

“Cartoonist Derek grapples with a perplexing association between disability and bullying in this stand-alone sequel to My Life as a Book (2010) and My Life as a Stuntboy (2011).” —Kirkus Reviews

“A kinder, gentler Wimpy Kid with all the fun and more plot.” —Kirkus Reviews, starred review on My Life as a Book

“Sure to engage fans of Jeff Kinney's ‘Diary of a Wimpy Kid' books as well as those looking for a spunky, contemporary boy with a mystery to solve.” —School Library Journal on My Life as a Book