Winnie: The True Story of the Bear Who Inspired Winnie-the-Pooh (Hardcover) 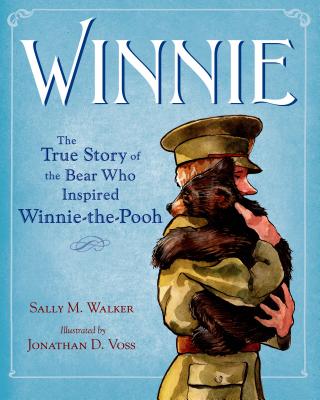 Winnie: The True Story of the Bear Who Inspired Winnie-the-Pooh (Hardcover)

Who could care for a bear?

When Harry Colebourn saw a baby bear for sale at the train station, he knew he could care for it. Harry was a veterinarian. But he was also a soldier in training for World War I.

Harry named the bear Winnie, short for Winnipeg, his company's home town, and he brought her along to the training camp in England. Winnie followed Harry everywhere and slept under his cot every night. Before long, she became the regiment's much-loved mascot.

But who could care for the bear when Harry had to go to the battleground in France? Harry found just the right place for Winnie while he was away -- the London Zoo. There a little boy named Christopher Robin came along and played with Winnie -- he could care for this bear too!

Sally M. Walker is the author of Champion, a JLG selection, one of NCTE's 2019 Orbis Pictus Honor Books, and a 2019 NSTA Outstanding Science Trade Book. She is also the author of ALA Notable Blizzard of Glass: The Halifax Explosion of 1917; the acclaimed picture book Winnie; and Secrets of a Civil War Submarine, which was awarded a Sibert Medal. She lives in Illinois.

Jonathan D. Voss was a portrait artist and graphic designer before becoming a children's book illustrator. Winnie: The True Story of the Bear Who Inspired Winnie-the-Pooh by Sally Walker was his first book. Brave Enough for Two is his author-illustrator debut. He lives in North Carolina with his family.

“Readers will be captivated by the fictionalized picture book account of the bear that eventually became the inspiration for A.A. Milne's acclaimed "Winnie-the-Pooh" series.” —School Library Journal

“Ideal for Winnie the Pooh fans, this clear, straightforward biography reveals the bear behind the tale.” —Kirkus Reviews

“Walker's short, descriptive text provides the essentials of the story, and Voss's watercolor illustrations portray the unusual situation with a mix of realism and humor.” —The Horn Book

“This is an intriguing and well-written look at a different era....Voss' watercolor and pen and ink illustrations paint a casual and affectionate portrait of man and bear.” —Bulletin of the Center for Children's Books (BCCB)