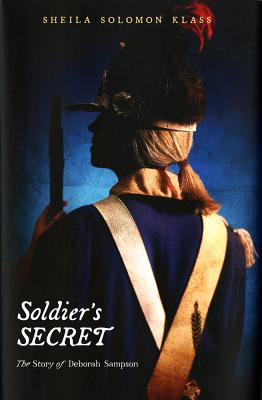 In the 1700s, women's responsibilities were primarily child rearing and household duties. But Deborah Sampson wanted more from life. She wanted to read, to travel—and to fight for her country's independence. When the colonies went to war with the British in 1775, Deborah was intent on being part of the action. Seeing no other option, she disguised herself in a man's uniform and served in the Continental army for more than a year, her identity hidden from her fellow soldiers.

SHEILA SOLOMON KLASS has been writing fiction for young adults for nearly five decades. Her books include The Uncivil War ; Shooting Star: A Novel About Annie Oakley; and Little Women Next Door. Ms. Klass lives in New York City.

“*Klass expertly fills in the gaps, drawing a portrait of a proud girl who, from her early fascination with Joan of Arc, becomes entranced with the idea of a real-life ‘heroine.'…An admirable accomplishment...” —Booklist, starred review

“The real-life Deborah Sampson's experiences dressing as a man for two years to serve as a soldier during the Revolutionary War form the foundation of Klass's (The Uncivil War) provocative historical novel...it's Klass's telling use of details that brings this story to life.” —Publishers Weekly

“The writing is clear and concise, and Deborah's voice rings with authenticity. An excellent choice for fans of historical fiction, fictionalized biographies, and stories about brave women.” —School Library Journal