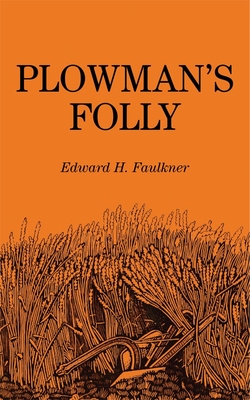 
Not On Our Shelves—Ships in 1-5 Days
It may be an overstatement to say that this book changed the face of American agriculture, but it comes very close to the truth. In the third of a century since its original publication the disk harrow has largely replaced the moldboard plow in agriculture. Mr. Faulkner's once startling, heretical doctrine-that the organic stuff of a season's crops should g back into the upper surfaces of the soil, not at the level of the plowsole of the almost universally used moldboard-has received widespread acceptance. "The fact is, said Mr. Faulkner, "that no one has ever advanced a scientific reason for plowing." With that key sentence he opened a new era in farming. He proved rather conclusively that soil impoverishment, erosion, decreasing crop yields, and many of the adverse effects following droughts or periods of excessive rainfall could be traced directly to the practice of plowing fertilizers deep into the soil. By incorporating green manures into the surface, he transformed ordinary even inferior, soils extremely productive, high-yield croplands. Plowman's Folly has gone through many printings in countries around the world-it is estimated that more than half a million copies have been printed. Time magazine called it "one of the most revolutionary ideas in agricultural history." "Here is indeed an unorthodox, and optimistic and a thought provoking book. . ." -New York Times. "An extraordinary phenomenon in American farm history. . . has been the furor over Edward H. Faulkner's Plowman's Folly. . ."-Harper's Magazine. Edward H. Faulkner lived in Elyria, Ohio, the scene of his epic experiments. He was a county agent in Kentucky and Ohio, a Smith-Hughes teacher of agriculture and a soil and crop investigator in private employment. He wrote several other books, including Soil Development and Uneasy Money, both published by the University of Oklahoma Press. Savoie Lottinville was director of the University of Oklahoma Press when Plowman's Folly was originally published.