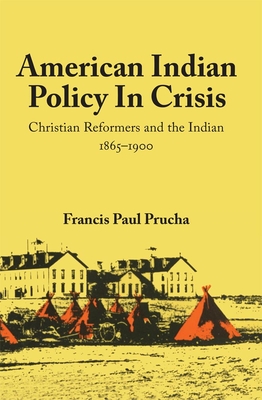 
Not On Our Shelves—Ships in 1-5 Days
" Francis Paul Prucha's] contextual definition and rigorous exemplification of what 'assimilation' meant to Protestant reformers of the late nineteenth century represents a unique and valuable contribution to our cultural history." American Historical Review The years 1865 to 1900 formed one of the most critical periods in Indian-white relations in the United States. Here, renowned historian Francis Paul Prucha discusses in detail the major developments of those years-Grant's Peace Policy, the reservation system, agitation for transfer of Indian affairs to military control, the General Allotment Act (or Dawes Act), Indian citizenship, Indian education, civil service reform of the Bureau of Indian Affairs, and the dissolution of the Indian nations of the Indian Territory. In examining these developments, American Indian Policy in Crisis focuses on the Christian humanitarians and philanthropists who ultimately drove the "reform" of Indian affairs. Prucha examines at length the programs of these men and women intent on individualizing and Americanizing the Indians and turning them into patriotic American citizens indistinguishable from their white neighbors. The story is not a pretty one, for reformers' changes were often disastrous for the Indians, and yet this is a tremendously important work for understanding the Indians' situation and their place in American society today. Prucha does not treat Indian policy in isolation but relates it to the dominant cultural and intellectual currents of the age. This book furnishes a view of the evangelical Christian influence on American policy and the reforming spirit it engendered, both of which have a significance extending beyond Indian policy. Complete with thorough documentation and an excellent bibliography, Prucha's text is a valuable contribution to America's cultural history. Francis Paul Prucha, S.J., is Professor Emeritus of History at Marquette University and the author of numerous articles and books, including The Great Father: The United States Government and American Indians.