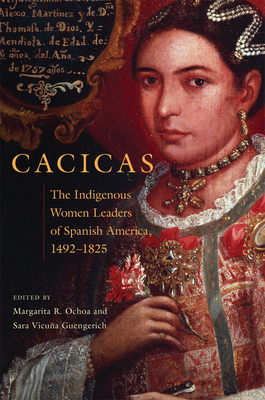 
Not On Our Shelves—Ships in 1-5 Days
The term cacica was a Spanish linguistic invention, the female counterpart to caciques, the Arawak word for male indigenous leaders in Spanish America. But the term's meaning was adapted and manipulated by natives, creating a new social stratum where it previously may not have existed. This book explores that transformation, a conscious construction and reshaping of identity from within. Cacicas feature far and wide in the history of Spanish America, as female governors and tribute collectors and as relatives of ruling caciques--or their destitute widows. They played a crucial role in the establishment and success of Spanish rule, but were also instrumental in colonial natives' resistance and self-definition. In this volume, noted scholars uncover the history of colonial cacicas, moving beyond anecdotes of individuals in Spanish America. Their work focuses on the evolution of indigenous leadership, particularly the lineage and succession of these positions in different regions, through the lens of native women's political activism. Such activism might mean the intervention of cacicas in the economic, familial, and religious realms or their participation in official and unofficial matters of governance. The authors explore the role of such personal authority and political influence across a broad geographic, chronological, and thematic range--in patterns of succession, the settling of frontier regions, interethnic relations and the importance of purity of blood, gender and family dynamics, legal and marital strategies for defending communities, and the continuation of indigenous governance. This volume showcases colonial cacicas as historical subjects who constructed their consciousness around their place, whether symbolic or geographic, and articulated their own unique identities. It expands our understanding of the significant influence these women exerted--within but also well beyond the native communities of Spanish America.