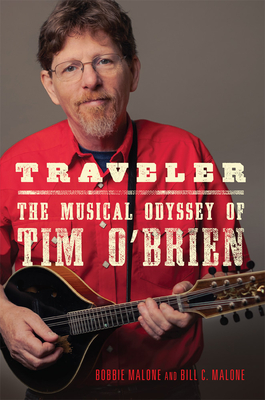 
On Our Shelves Now at:
For five decades, as a singer, musician, songwriter, and producer, Tim O'Brien has ceaselessly explored the vast American musical landscape. While Appalachia and Ireland eventually became facets of the defining myth surrounding him and his music, he has digested a broad array of roots styles, reshaping them to his own purposes. Award-winning biographer Bobbie Malone and premier country music historian Bill C. Malone have teamed again, this time to chronicle O'Brien's career and trace the ascent of Hot Rize and its broadening and enrichment of musical traditions. At the beginning of that career, O'Brien moved from his native West Virginia to the Rocky Mountain West. In just a few years, he became the lead singer, mandolin and fiddle player, and principal songwriter of beloved 1980s bluegrass band Hot Rize. Seeking to move beyond bluegrass, he next went to Nashville. O'Brien's success in navigating the shoals of America's vast reservoir of folk musical expressions took him into the realm of what is now called Americana. The core of Tim O'Brien's virtuosity is his abiding and energetic pursuit of the next musical adventure. As a traveler, he has ranged widely in choosing the next instrument, song, style, fellow musicians, or venue. Written with O'Brien's full cooperation and the input of family, friends, colleagues, and critics, Traveler provides the first complete, behind-the-scenes picture of a thoroughly American self-made musical genius--the boy who grew up listening to country artists at the WWVA Wheeling Jamboree and ended up charting a new course through American music.