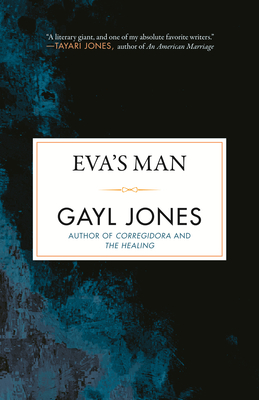 
On Our Shelves Now at:
"The Best American Novelist Whose Name You May Not Know"—Calvin Baker, The Atlantic

"A literary giant, and one of my absolute favourite writers" -TAYARI JONES, author of AN AMERICAN MARRIAGE

"An American writer with a powerful sense of vital inheritance, of history in
the blood." -John Updike, The New Yorker

Eva's Man is a gripping psychological portrait of a woman unable to love for fear of pain. Imprisoned for the bizarre murder of her lover, Eva Median Canada weaves together memory and fantasy to reveal a life tormented by the brutality of sexual abuse and emotional silence. Brilliantly experimenting with language, Jones infuses her graphic and powerful narrative of the triple yoke of race, class, and gender with a rich musical and oral idiom.
Gayl Jones was born in Kentucky in 1949. She attended Connecticut College and Brown University, and has taught at Wellesley College and the University of Michigan. Her other books include THE HEALING (1998 National Book Award Finalist and New York Times Notable Book of the Year) and many others.
"Gayl Jones ... accomplishes the almost impossible: a second novel that's every bit as intense, brutally honest and haunting as her first"—Mademoiselle

"Gayl Jones's work remains essential and vital; I will be rereading her catalog for the rest of my life"— Kima Jones, Nylon

"Gayl Jones is one furious, lacerating writer. You don't read her easily, and you can't forget her at all . . . Hyper-real and traumatic as this novel is, it's one that's been waiting to be written since Samuel Richardson gave us the male point of view of Clarissa, that other fallen woman whose only acceptable alternative to ravishment was death. Eva's silence, and her status here as legally insane, are eloquent testimony to the condition of being a woman in this man's world"— Kirkus