The Broken Spears 2007 Revised Edition: The Aztec Account of the Conquest of Mexico (Paperback) 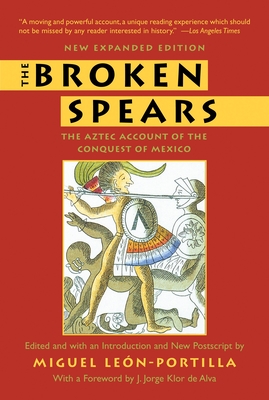 The Broken Spears 2007 Revised Edition: The Aztec Account of the Conquest of Mexico (Paperback)


Not On Our Shelves—Ships in 1-5 Days
For hundreds of years, the history of the conquest of Mexico and the defeat of the Aztecs has been told in the words of the Spanish victors. Miguel León-Portilla has long been at the forefront of expanding that history to include the voices of indigenous peoples. In this new and updated edition of his classic The Broken Spears, León-Portilla has included accounts from native Aztec descendants across the centuries. These texts bear witness to the extraordinary vitality of an oral tradition that preserves the viewpoints of the vanquished instead of the victors. León-Portilla's new Postscript reflects upon the critical importance of these unexpected historical accounts.
Miguel León-Portilla, renowned historian and anthropologist, is best known for his work regarding Nahuatl history. His works include The Broken Spears: The Aztec Account of the Conquest of Mexico; Native Meso-American Spirituality; and In the Language of Kings: An Anthology of Mesoamerican Literature—Pre-Columbian to the Present. León-Portilla studied at Loyola University and National Autonomous University.
A moving and powerful account, a unique reading experience which should not be missed by any reader interested in history.—Los Angeles Times
For This Book...
Staff Pick