Walden: With an Introduction and Annotations by Bill McKibben (Concord Library) (Paperback) 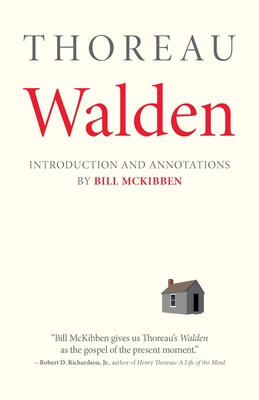 Walden: With an Introduction and Annotations by Bill McKibben (Concord Library) (Paperback)


In Stock—Click for Locations
In honor of the bicentennial of Henry David Thoreau’s birth, this edition of Walden features an introduction and annotations by renowned environmentalist Bill McKibben

"Bill McKibben gives us Thoreau's Walden as the gospel of the present moment, as a neccessary book because it is useful right now."
--Robert Richardson, author of Henry Thoreau, A Life of the Mind and Emerson: The Mind on Fire

“We need to understand that when Thoreau sat in the dooryard of his cabin ‘from sunrise till noon, rapt in a revery, in undisturbed solitude and stillness, while the birds sang around or flitted noiseless through the house,’ he was offering counsel and example exactly suited for our perilous moment in time.”
—Bill McKibben, from the introduction

First published in 1854, Henry David Thoreau’s groundbreaking book has influenced generations of readers and continues to inspire and inform anyone with an open mind, a love of nature, and a longing for simplicity and contemplation. Bill McKibben provides a newly revised introduction and helpful annotations that place Thoreau firmly in his role as cultural and spiritual seer. This beautiful edition of Walden, published in honor of the bicentennial of Thoreau’s birth, is more accessible and relevant than ever in an age of technological change and ecological crisis.
Henry David Thoreau (1817-1862) was a writer, philosopher, and naturalist. Walden is considered his masterpiece.

Bill McKibben has written a dozen books about the environment, including The End of Nature and Oil and Honey. Founder of the grassroots climate campaign 350.org, he is a scholar in residence at Middlebury College.
“Walden—republished by Beacon Press this year with an inspired introduction by Bill McKibben about Thoreau’s relevance to our own spiritually impoverished reality—is arguably the most important work of literary nonfiction in the American canon.”
—The New York Review of Books

“Bill McKibben gives us Thoreau’s Walden as the gospel of the present moment.”
—Robert D. Richardson Jr., author of Henry Thoreau: A Life of the Mind

“A stunning new edition [with an] illuminating introduction...McKibben’s voice melds with, but never overtakes, that of Thoreau.”
—The Oregonian

“McKibben provides the most Thoreauvian introduction to Thoreau’s classic that I have ever seen.”
—Lawrence Buell, author of Emerson and Writing for an Endangered World