Above Baton Rouge: A Pilot's View Then and Now (Hardcover) 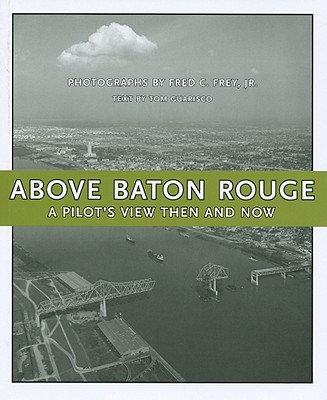 Above Baton Rouge: A Pilot's View Then and Now (Hardcover)

In Above Baton Rouge, photographer and pilot Fred C. Frey, Jr., offers a breathtaking bird's-eye view of the development of Louisiana's capital city over time. Vivid pairs of black-and-white aerial photographs taken from similar angles and altitudes forty years apart reveal stunning, sweeping changes that might be taken for granted at eye level, providing a one-of-a-kind visual chronicle of Baton Rouge then and now.
In the early 1960s, Frey began taking aerial photographs of Baton Rouge sites to help evaluate their potential for possible real estate developments. What started as an innovative business practice soon developed into an ongoing passion for viewing and capturing his hometown from above as it experienced explosive growth over the next forty years. A skilled aviator and Korean War veteran, Frey would bank his Cessna 150, pop open the window, and -- with both hands on the camera -- snap vivid pictures. He honed his compositions, always searching for familiar landmarks, major intersections, and distinctive buildings. Over time, Frey amassed a cache of more than five thousand negatives.
Frey documents the enormous strides Baton Rouge has taken since the 1960s: developers clearing vast forests to make way for massive new subdivisions and shopping districts; a downtown resurrecting itself in the face of unprecedented suburban competition; LSU and Southern University extending their footprints; refineries and chemical plants expanding Baton Rouge's industrial corridor; and the interstate system steadily carving a path through the parish.
In the early 1990s, Frey realized the value of his images, many of which depicted aspects of Baton Rouge no longer in existence. He began in earnest to create modern counterparts to his earliest photographs in order to illustrate how much had changed. The astounding results show fledgling subdivisions surrounded by pastures transforming into sprawling communities. Two-lane country roads ballooned into six- and eight-lane thoroughfares, straddled by mile after mile of commercial development.
Frey took every photograph in this book with the same beloved Hasselblad camera system he bought in 1962. Above Baton Rouge therefore offers a unique yet consistent perspective on the metropolitan area's ever-changing landscape. Illuminating text by Tom Guarisco points out key landmarks and features and draws attention to striking differences between companion photos.
Frey's masterfully shot aerial photography gives proof to Baton Rouge's boundless energy and industry -- and its thirst for new places to live, work, shop, and play.

Fred C. Frey, Jr., was a real estate developer in the Greater Baton Rouge area for over thirty years. Both of his children are professional photographers. He lives in Chamberlin, Louisiana, with Martha, his wife of fifty-eight years.An award-winning journalist, Tom Guarisco is editor of 225 Magazine and lives in Baton Rouge.