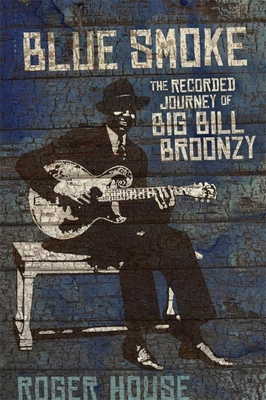 A contemporary of blues greats Blind Blake, Tampa Red, and Papa Charlie Jackson, Chicago blues artist William Big Bill Broonzy influenced an array of postwar musicians, including Muddy Waters, Memphis Slim, and J. B. Lenoir. In Blue Smoke, Roger House tells the extraordinary story of Big Bill, a working-class bluesman whose circumstances offer a window into the dramatic social transformations faced by African Americans during the first half of the twentieth century.
One in a family of twenty-one children and reared by sharecropper parents in Mississippi, Broonzy seemed destined to stay on the land. He moved to Arkansas to work as a sharecropper, preacher, and fiddle player, but the army drafted him during World War I. After his service abroad, Broonzy, like thousands of other black soldiers, returned to the racism and bleak economic prospects of the Jim Crow South and chose to move North to seek new opportunities. After learning to play the guitar, he performed at neighborhood parties in Chicago and in 1927 attracted the attention of Paramount Records, which released his first single, House Rent Stomp, backed by Big Bill's Blues.
Over the following decades, Broonzy toured the United States and Europe. He released dozens of records but was never quite successful enough to give up working as a manual laborer. Many of his songs reflect this experience as a blue-collar worker, articulating the struggles, determination, and optimism of the urban black working class. Before his death in 1958, Broonzy finally achieved crossover success as a key player in the folk revival movement led by Pete Seeger and Alan Lomax, and as a blues ambassador to British musicians such as Lonnie Donegan and Eric Clapton.
Weaving Broonzy's recordings, writings, and interviews into a compelling narrative of his life, Blue Smoke offers a comprehensive portrait of an artist recognized today as one of the most prolific and influential working-class blues musicians of the era.

Roger House is an assistant professor in American Studies at Emerson College in Boston, Massachusetts.