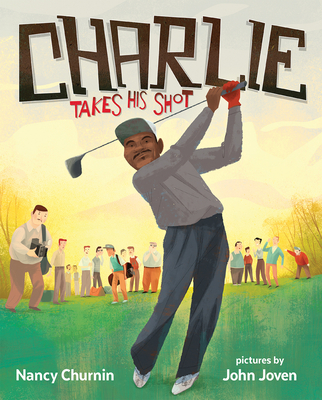 
On Our Shelves Now at:
Charlie Sifford loved golf, but in the 1930’s only white people were allowed to play in the Professional Golf Association. Sifford had won plenty of black tournaments, but he was determined to break the color barrier in the PGA. In 1960 he did, only to face discrimination from hotels that wouldn’t rent him rooms and clubs that wouldn’t let him use the same locker as the white players. But Sifford kept playing, becoming the first black golfer to win a PGA tournament and eventually ranking among the greats in golf.
Nancy Churnin is the theater critic for the Dallas Morning News and author of several picture books for children. She was born in New York and graduated from Harvard University with a master's from Columbia University School of Journalism. She lives in Dallas, Texas, with her husband, Dallas Morning News arts writer Michael Granberry, and their four sons. John Joven has illustrated numerous children's books, magazines, apps, and comic books published around the world. He lives in Colombia.
"A poignant and inspiring tale of a groundbreaking sports figure whose name and story should be well-known." —Kirkus Reviews

"A quietly affecting story . . . . Churnin concludes on a hopeful note: 'And now it was possible for everyone who loved the game to play and hear cheers from the crowd.'" —Publishers Weekly