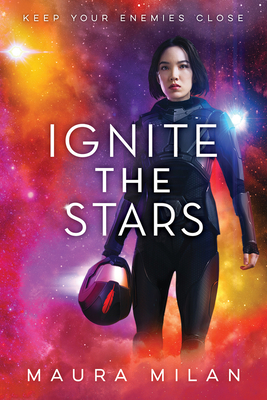 A criminal mastermind and unrivaled pilot, Ia has spent her life terrorizing the Olympus Commonwealth, the imperialist nation that destroyed her home. When the Commonwealth captures her and her true identity is exposed, they see Ia’s age and talent as an opportunity: by forcing her to serve them, they will prove that no one is beyond their control.

Soon, Ia is trapped at the Commonwealth’s military academy, desperately plotting her escape. But new acquaintances—including Brinn, a seemingly average student with a closely-held secret, and their charming Flight Master, Knives—cause Ia to question her own alliances. Can she find a way to escape the Commonwealth’s clutches before these bonds deepen?

In this exhilarating edge-of-your-seat sci-fi adventure—perfect for fans of The Lunar Chronicles—debut author Maura Milan introduces our world to a thrilling new heroine.
Maura Milan received her BA in Film Production from USC's School of Cinema-Television and currently lives in Los Angeles, where she works in video production. Ignite the Stars is her first novel.
"Get ready to meet Ia, a take-no-prisoners heroine who stole my heart from page one, and kept me cheering until the very end. Treat yourself to this book!" ―Kass Morgan, New York Times bestselling author of The 100 series

"Despite its otherworldly setting, Maura Milan's captivating debut has a compelling real-world quality that shine through her well-crafted characters and their fight for social justice. I can't wait to read what happens next." ―Romina Russell, New York Times bestselling author of the ZODIAC series

"Milan makes a solid debut with this novel of space pirates, governmental empires, simmering teen rebellion, and questions about whether a person is truly all good or bad." —Booklist

"Milan is excellent at establishing relatable, complex characters. The action-packed sequences, with spaceship battles and academic competition, are so engaging, teens won’t be able to put the book down. A strong first book in a sure-to-be successful science fiction series." —School Library Journal