Unruly Americans and the Origins of the Constitution (Paperback) 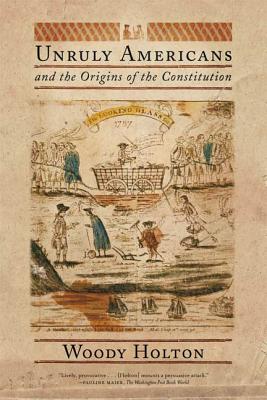 Unruly Americans and the Origins of the Constitution (Paperback)

Average Americans Were the True Framers of the Constitution

Woody Holton upends what we think we know of the Constitution's origins by telling the history of the average Americans who challenged the framers of the Constitution and forced on them the revisions that produced the document we now venerate. The framers who gathered in Philadelphia in 1787 were determined to reverse America's post–Revolutionary War slide into democracy. They believed too many middling Americans exercised too much influence over state and national policies. That the framers were only partially successful in curtailing citizen rights is due to the reaction, sometimes violent, of unruly average Americans.

Unruly Americans and the Origins of the Constitution is a 2007 National Book Award Finalist for Nonfiction.

Woody Holton is an associate professor of history at the University of Richmond and the author of the award-winning book Forced Founders: Indians, Debtors, Slaves, and the Making of the American Revolution in Virginia.

“Holton demonstrates a lucid and systematic dismantling of the myths surrounding the making of our national government. His succinct account persuasively revives the economic interpretation of the Constitution in terms well-suited for our times, and it will surely become the essential work for students of the founding era. The Constitution enabled the ascent of the United States to great political and economic power, Holton makes plain, but at a profound cost to democracy. If Americans today find our national politicians entrenched in office, out of touch with their constituents, and responsive to lobbyists for the rich, they will understand why after reading this compelling book.” —Robert A. Gross, James L. And Shirley A. Draper Professor of Early American History, University of Connecticut, and author of The Minutemen and Their World

“Woody Holton reframes the coming of the Constitution, revealing the rich debate Americans conducted over the cause of capital in the new land. In this account, real people--farmers, soldiers, taxpayers, speculators, creditors and entrepreneurs--replace images of the Founders, and intimate issues like tax fairness, economic effects, and electoral accountability matter far more than abstractions. The result is a new and compelling history.” —Christine Desan, Professor of Law, Harvard Law School

“Woody Holton invites us to revise most of what we think we know about the origins of the United States Constitution. In this account the Founding Fathers do not appear as selfless philosophers journeying to Philadelphia to explore competing theories of republican government. Rather, Holton describes them as deeply anxious men, determined to contain a surge of popular democracy that seemed to threaten their financial interests. In this brilliantly researched study Holton thus revives an economic interpretation of the Constitution and in the process reminds us that ordinary American farmers after the Revolution imagined a strikingly different nation from the one that the Founders gave us.” —T.H. Breen, Director, Center for Historical Studies, Northwestern University

“Here is a book that helps answer the puzzle of how in 1787 the framers of the Constitution curbed what they considered ‘the excess of democracy' in the states and at the same time accommodated democratic pressures. Using a vast array of little appreciated contemporary sources, Holton constructs a fresh, sinewy argument that unfolds with a mounting sense of excitement. The result is a tough, realistic way of thinking about the founders. Unruly Americans is a brilliant book, rich with insights into the American Revolution and the Constitution.” —Alfred Young, author of Liberty Tree: Ordinary People and the American Revolution

“Move over, Founding Fathers. It turns out that average Americans from the ‘unruly mob' had more to do with insuring the personal liberties we Americans now hold dear than did the Framers we so revere. Woody Holton's fascinating and energetic new book makes us take a fresh look at the Constitution, especially the Bill of Rights. The populist underpinnings of our Republic are real, and this has clear implications for the role that citizens ought to play today in reforming American democracy. Holton's lesson: If the establishment won't change the system, the people can. They've done it from the beginning.” —Larry J. Sabato, Director, Center for Politics, University of Virginia