The Cartoon Introduction to Philosophy (Paperback) 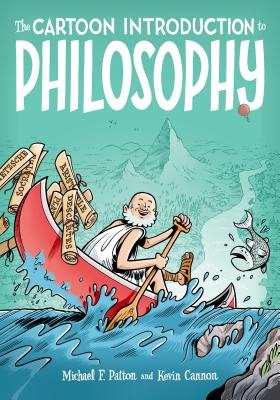 The Cartoon Introduction to Philosophy (Paperback)

The most entertaining and engaging philosophy class you'll ever take!

In The Cartoon Introduction to Philosophy, Michael F. Patton and Kevin Cannon introduce us to the grand tradition of examined living. With the wisecracking Heraclitus as our guide, we travel down the winding river of philosophy, meeting influential thinkers from nearly three millennia of Western thought and witnessing great debates over everything from ethics to the concept of the self to the nature of reality.

Combining Cannon's playful artistry and Patton's humorous, instructive prose, The Cartoon Introduction to Philosophy puts the fun back into the quest for fundamental truths, imparting a love of wisdom to anyone willing to grab a paddle and join the ride.

Illustrator Kevin Cannon has worked for clients ranging from the National Oceanic and Atmospheric Administration to DC Comics, collaborating on such titles as The Replacement God and Smax and winning two Eisners for their work on Top 10.

Illustrator Kevin Cannon has worked for clients ranging from the National Oceanic and Atmospheric Administration to DC Comics, collaborating on such titles as The Replacement God and Smax and winning two Eisners for their work on Top 10.

“In the entertaining, erudite Cartoon Introduction to Philosophy, the game Heraclitus travels down the winding river of philosophical thought to lead us through a pocket history of examined living . . . Michael Patton and Kevin Cannon's guide to philosophical thought is a creative addition to the cartoon academy, offering readers well-written, engaging mini-portraits of influential thinkers.” —Dan Kois, Slate

“The Cartoon Introduction to Philosophy is as good a philosophy book as it is a comicbook. Indeed, the force of the arguments, the give-and-take between the opposing voices, and the clear presentation of what is important in each of these classic debates makes this book a better introduction to philosophy than many . . . It helps to raise some interesting questions about the visual nature of philosophy itself and it reminds us of the power of comicbooks to tell our stories, express our ideas, and help us think.” —Gregory L. Reece, PopMatters

“A fun, clear and clever introduction to the rich history of philosophy in the Western world.” —Kirkus Reviews

“Like many nonfiction graphic novels written by non-comic writers, philosophy professor Patton's wordy text drives the narrative. But Cannon's art transcends what could have been a second-place relationship to keep this textbook-like explanation of the key thinkers of history visually entertaining . . . The concept-based structure, which incorporates ideas from across eras, is welcoming and understandable to the casual reader” —Publishers Weekly

“Michael Patton's clever dialogue turns even the most difficult topics into lively discussions and Kevin Cannon's noodly illustrations create appealing characters who fascinate with every jaunty step. Together, Patton and Cannon have created a captivating book that proves that graphic narratives can teach just as well, or better, than traditional textbooks. This book is an excellent resource for both students and non-students alike.” —Lindsay Hodgens, Alabama Writers' Forum

“Michael Patton and Kevin Cannon have pulled off something remarkable; they've produced a rigorous introduction to philosophy in the form of a comic book. In these times of assaults on education from ideological, economic, and political dimensions, it is essential to ignite a love of learning and inquiry in folks--both young and old. With consistent wit, marvelous pacing, and brilliant illustrations, Patton and Cannon take the reader through simple but accurate explanations of the basic ideas of many of the canonical figures from the history of philosophy, linking these ideas to other disciplines and at all points drawing the reader into the great dialogues of the Western intellectual tradition.” —Mark Lance, professor of philosophy and professor of justice and peace, Georgetown University

“The Cartoon Introduction to Philosophy is smart, funny, and up-to-date. Entertaining without oversimplifying, Patton and Cannon bring the world of philosophy to life. For those who have not yet been exposed to the pleasures of philosophy, The Cartoon Introduction to Philosophy is a great place to start.” —Todd May, Class of 1941 Memorial Professor of the Humanities, Clemson University

“If this isn't the Platonic ideal of a graphic novel about philosophy, I don't know what is. Michael F. Patton and Kevin Cannon's The Cartoon Introduction to Philosophy is terrific, and that's probably the only thing you could get all the philosophers featured in their book to agree on.” —Jim Ottaviani, author of The Imitation Game, Feynman, and Primates.