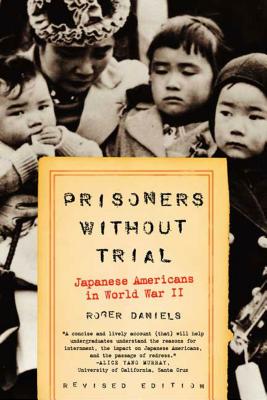 Prisoners Without Trail is part of Hill and Wang's Critical Issues Series and well established on college reading lists.

This book presents a concise introduction to a shameful chapter in American history: the incarceration of nearly 120,000 Japanese Americans during World War II.

With a revised final chapter and expanded recommended readings, Roger Daniels's updated edition examines a tragic event in our nation's past and thoughtfully asks if it could happen again.

Roger Daniels, author of Prisoners Without Trial: Japanese Americans in World War II, is a renowned expert on immigration, consultant to PBS and the Immigration Museum on Ellis Island, and expert witness on Japanese-American internment.

“This is a succinct synthesis of the latest scholarship on Japanese American relocation during the Second World War, interpreted by the leading historian of the subject. Daniels's account is broadly conceived, yet briefly executed. It is exciting to read, and shocking.” —Robert Allen Skotheim, president, The Huntington

“Distilled from three decades of meticulous research and nuanced reflection by the foremost expert in Japanese American history. This is the most succinct and masterful synthesis available of the ordeal Japanese Americans suffered during World War II.” —Sucheng Chan, University of California at Santa Barbara

“The arbitrary internment of Japanese Americans was one of the most shameful episodes of our history. And nobody knows the subject better than Roger Daniels. He writes with authority and clarity. His book should be read by everyone concerned with our civil liberties.” —Stanley Karnow