A Search for Clarity: Science and Philosophy in Lacan's Oeuvre (Diaeresis) (Paperback) 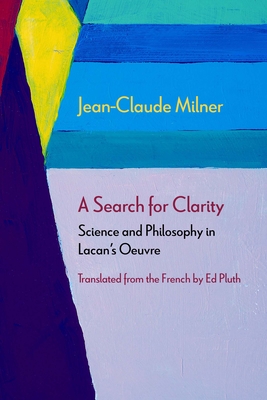 A Search for Clarity: Science and Philosophy in Lacan's Oeuvre (Diaeresis) (Paperback)

In A Search for Clarity, Jean‑Claude Milner argues that although Jacques Lacan’s writing is notoriously obscure his oeuvre is entirely clear. In a discussion that considers the difference between the esoteric and exoteric works of Plato and Aristotle, Milner argues that Lacan’s oeuvre is to be found in his published writings alone, not his transcribed seminars, and that these published writings contain his official doctrine. Thus, Lacan’s oeuvre is already complete, even though many of his seminars remain unpublished.

According to Milner, Lacan’s fundamental idea is that the subject psychoanalysis works on is the subject of science. Milner suggests that this is a supplement to Alexandre Koyré’s and Alexandre Kojève’s accounts of modern science, for which mathematization and a break from the ancient episteme were key.

A Search for Clarity is the definitive statement on how Lacan viewed the relationship between psychoanalysis and science, and on how Lacan’s thinking evolved as he struggled to draw out the consequences of the equation he posited between psychoanalysis and science. Milner’s work on Lacan has been essential reading in French for decades. This English translation will make his illuminating work accessible to a broader audience.

JEAN‑CLAUDE MILNER is an emeritus professor of linguistics at Paris Diderot University and a former director of the Collège International de Philosophie. Milner was a student of Louis Althusser and attended Jacques Lacan’s seminars. One of the founders of the trailblazing journal Cahiers pour l’analyse, Milner has published more than thirty‑five books in French, including contributions to linguistics, philosophy, psychoanalytic theory, history, pop culture, and politics.

ED PLUTH is a professor of philosophy at California State University, Chico. He is the author of Signifiers and Acts: Freedom in Lacan’s Theory of the Subject and Alain Badiou: A Philosophy of the New.

“Milner’s original mapping of an epistemology of the Unconscious provides a systematic overview of Lacan’s main programs and their subsequent deconstruction, along with witty asides, memorable one-liners, and unexpected philosophical parallels. Here is clarity so bright and sharp that it illuminates without blinding.” —Jean-Michel Rabaté, author of Kafka L.O.L.: Notes on Promethean Laughter

“Independently of whether one agrees with its at times draconian conclusions, Milner’s L’œuvre claire, now finally available in English translation, remains one of the most significant, cogent, and influential contributions to the field of Lacanian studies. Moving from the disarming yet crucial premise that we should consider Lacan as a ‘crystal-clear author,’ this book makes compulsory reading for anyone interested in the complex status of psychoanalysis vis-à-vis science, epistemology, and ontology.” —Lorenzo Chiesa, author of The Virtual Point of Freedom: Essays on Politics, Aesthetics, and Religion (Northwestern University Press, 2016)