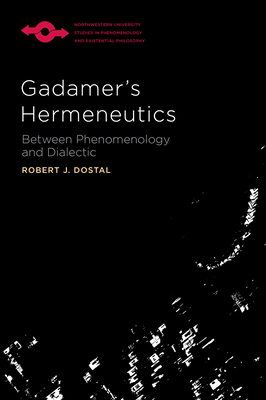 
Special Order—Subject to Availability
In Gadamer’s Hermeneutics Robert J. Dostal provides a comprehensive and critical account of Hans-Georg Gadamer’s hermeneutical philosophy, arguing that Gadamer’s enterprise is rooted in the thesis that “being that can be understood is language.” He defends Gadamer against charges of linguistic idealism and emphasizes language’s relationship to understanding, though he criticizes Gadamer for too often ignoring the role of the prelinguistic in our experience. Dostal goes on to explain the concept of the "inner word" for Gadamer’s account of language.

The book situates Gadamer’s hermeneutics in three important ways: in relation to the contestability of the legacy of the Enlightenment project; in relation to the work of his mentor, Martin Heidegger; and in relation to Gadamer’s reading of Plato and Aristotle. Dostal explores both Gadamer’s claim on the Enlightenment and his ambivalence toward it. He considers Gadamer’s dependence on Heidegger’s accomplishment while pointing out the ways in which Gadamer charted his own course, rejecting his teacher’s reading of Plato and his antihumanism. Dostal points out notable differences in the philosophers’ politics as well. Finally, Dostal mediates between Gadamer’s hermeneutics and what might be called philological hermeneutics. His analysis defends the civic humanism that is the culmination of the philosopher’s hermeneutics, a humanism defined by moral education, common sense, judgment, and taste. Supporters and critics of Gadamer’s philosophy will learn much from this major achievement.
ROBERT J. DOSTAL is the Rufus M. Jones Professor of Philosophy at Bryn Mawr College. He is the editor of The Cambridge Companion to Gadamer.
“Robert J. Dostal has written an illuminating and compelling book on one of the most important philosophers of the twentieth century. He covers all the major topics in Gadamer’s work, providing not just clear and sensitive commentary, but a vigorous defense of Gadamer against both criticisms and misinterpretations. The book is destined to be a watershed in our understanding of hermeneutics as philosophy, as well as of Gadamer, especially his ‘civic humanism’ and his differences with his controversial teacher, Heidegger.” —Robert B. Pippin, author of Philosophy by Other Means: The Arts in Philosophy and Philosophy in the Arts

"The ripe fruit of a diligent, life-long dialogue with Gadamer, which began in 1969, this clearly written book succeeds in bringing out the civic humanism of Gadamer’s philosophy, its intellectual roots and its relevance for our times." —Jean Grondin, author of Hans-Georg Gadamer: A Biography

"A tour de force! In this comprehensive study Dostal not only let us see how Gadamer was inspired by Heidegger, but also where their differences—philosophical and political—lie. He also sets Gadamer’s reappropriation of Plato and Aristotle, his aesthetics, and understanding of the central role of 'the word' in the context of contemporary discussions of language and phenomenology." —Catherine Zuckert, author of Postmodern Platos: Nietzsche, Heidegger, Gadamer, Strauss, Derrida

"Dostal’s book is a brilliant and comprehensive account of Gadamer’s philosophy that underscores his humanism, importantly delineates his divergence from Heidegger, elucidates his thoughts on solidarity and sets his thought in relation not only to Plato and Aristotle but to Kant, Hegel, Arendt and a score of others." —Georgia Warnke, editor of Inheriting Gadamer: New Directions in Philosophical Hermeneutics

“A comprehensive nuanced interpretation of Gadamer’s hermeneutics and humanism. Dostal ranges over the entire corpus of Gadamer and judiciously analyzes how Gadamer has been influenced by, and departs from, both ancient and modern philosophers. Throughout Dostal’s reading exemplifies the virtue of phronesis—the virtue that is so central to Gadamer’s hermeneutics.” —Richard J. Bernstein, author of Ironic Life