The Biopolitics of Punishment: Derrida and Foucault (Paperback) 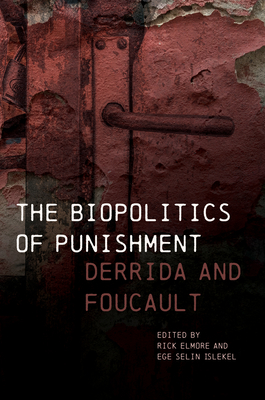 The Biopolitics of Punishment: Derrida and Foucault (Paperback)


Special Order—Subject to Availability
This volume marks a new chapter in the long-standing debate between Jacques Derrida and Michel Foucault regarding argumentative methods and their political implications. The essays chart the undertheorized dialogue between the two philosophers on questions of life, death, punishment, and power—an untapped point of departure from which we might continue to read the convergence and divergence of their work. What possibilities for political resistance might this dialogue uncover? And how might they relate to contemporary political crises?

With the resurgence of fascism and authoritarianism across the globe, the rise of white supremacist and xenophobic violence, and the continued brutality of state-sanctioned and extrajudicial killings by police, border patrols, and ordinary citizens, there is a pressing need to critically analyze our political present. These essays bring to bear the critical force of Derrida’s and Foucault’s biopolitical thought to practices of mass incarceration, the death penalty, life without parole, immigration and detention, racism and police violence, transphobia, human and animal relations, and the legacies of colonization. At the heart of their biopolitics, the volume shows, lies the desire to deconstruct and resist in the name of a future that is more just and less policed. It is this impulse that makes reading their work together, at this moment, both crucial and worthwhile.
RICK ELMORE is an associate professor of philosophy at Appalachian State University.

EGE SELIN ISLEKEL is an assistant professor of philosophy at Fordham University.

“Is it possible to theorize a deconstructive biopolitics? The political stakes of the Foucault-Derrida debate have never been clearer or more urgent. This spectacular group of writers opens a vital conversation about border zones and hunger strikes; detention centers and supermax prisons; Blackness, criminality, and necropolitics. Speaking from the heart of a prison society, it teaches us how to summon a world without prisons. A must-read book.” —Lynne Huffer, author of Foucault’s Strange Eros