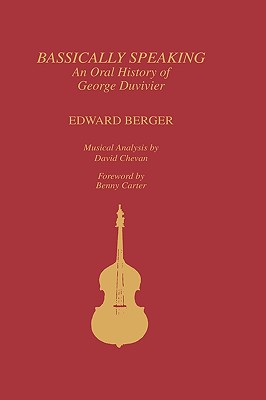 
Not On Our Shelves—Ships in 1-5 Days
"Both as a person and as a musician, he was number one in my book." -Benny Carter Bassist George Duvivier (1920-1985) was one of the most universally respected musicians in jazz. His impeccable musicianship graced the big bands in the 1940s and led to musical associations with virtually every important jazz and popular artist. His prolific recording career spanned all styles of music, from Eubie Blake to Eric Dolphy, Billie Holiday to Barry Manilow. Duvivier was a most astute and articulate observer of the musical scene. A large part of this book is devoted to his own reflections on growing up in Harlem in the 1920s and 1930s, the evolution of the bass, life in the commercial studios, and his memories of close associates-Coleman Hawkins, Jimmie Lunceford, Bud Powell, Lena Horne, and many others. In addition, twenty of Duvivier's colleagues, including Louie Bellson, Ron Carter, Milt Hinton, Ed Shaughnessy, Arthur Taylor, and Joe Wilder, have contributed, covering a variety of musical and social issues, as well as providing a loving portrait of an extraordinary artist. Duvivier's musical style is discussed by David Chevan, who has included transcriptions of several solos. An extensive discography/solography traces Duvivier's incredibly diverse recording career. With dozens of previously unpublished photos.
Edward Berger is Assistant Director, Institute of Jazz Studies, Rutgers University and co-editor of Scarecrow's Studies in Jazz series. He is co-author of Benny Carter: A Life in American Music and Teddy Reig's biography, Reminiscing in Tempo (vols. 1 and 10 in the series) and co-editor and frequent contributor to the Annual Review of Jazz Studies. David Chevan, a bassist and doctoral candidate in musiclolgy at the Graduate Center, CUNY, has published articles in The Black Perspective in Music and Black Music Research Journal.