Stride!: Fats, Jimmy, Lion, Lamb, and All the Other Ticklers (Studies in Jazz #31) (Hardcover) 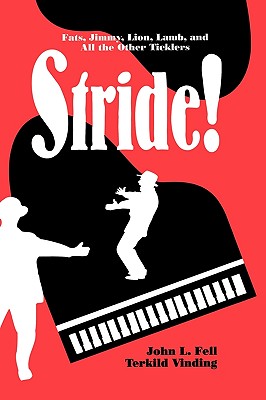 Stride!: Fats, Jimmy, Lion, Lamb, and All the Other Ticklers (Studies in Jazz #31) (Hardcover)


Not On Our Shelves—Ships in 1-5 Days
Stride traces the stride piano style from its roots in minstrel shows and ragtime, through the contributions of itinerant entertainers, to its joyful birth in Harlem, where it became known as Harlem Piano. Stride developed over a period spanning World War I to the depression years, though younger players maintain its traditions today. It is a musical style marked by friendly rivalry and shared pleasures. Drawing on the authors' personal interviews and biographies, the book traces stride from generation to generation, from the originators Eubie Blake, Luckey Roberts, and James P. Johnson, through a succession of pianists like Willie the Lion Smith. Fell and Vinding also examine its influence on Duke Ellington, Fats Waller, Joe Sullivan, and Johnny Guarnieri, concluding with third and fourth generations that include Ralph Sutton, Dick Hyman, and Dick Wellstood. The authors describe the exceptional Donald Lambert from personal experience. Throughout, influences are traced and documented by way of CD and LP citations. Stride finishes the tune with appendixes that itemize the compositions of Luckey Roberts, Fats Waller and Willie the Lion Smith.
John L. Fell (Ph.D., New York University) is Professor Emeritus at San Francisco State University. His articles and reviews have appeared in Film Quarterly and the Village Voice, and he is the author of numerous books on film including Film and the Narrative Tradition (University of California Press). The lateTerkild Vinding was trained at Copenhagen University's Medical School, where he specialized in psychiatry. He was a trained pianist, music collector, jazz enthusiast, and researcher, and counted a host of jazz artists among his friends.