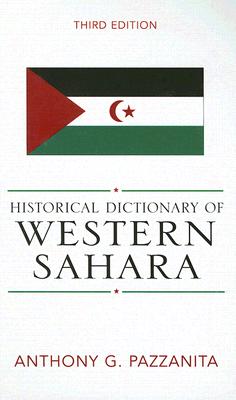 This is book number 96 in the Historical Dictionaries of Africa series.

Western Sahara is the last remaining colony in Africa. When it was released from Spanish rule in 1975, it was only to be replaced by the colonial rule of the neighboring countries of Mauritania and the Kingdom of Morocco. Even then, plans for a referendum were made to determine the country's status, but this solution has continually been put off from year to year while the situation festers. The resulting struggle has become increasingly bitter over the years. It has divided the territories population-many of whom now live abroad as refugees-resulted in a prolonged guerrilla war, pitted neighboring states against one another, and exercised the efforts of the United Nations, the Organization of African Unity (now African Union), and other peacekeeping bodies. There is no shortage of failed compromises and unimplemented resolutions. All that is lacking is an equitable solution. This book provides substantial information on Western Sahara's history, society, and culture through the use of hundreds of cross-referenced A to Z dictionary entries, a chronology of events, an introductory essay on Western Sahara, and a bibliography.
Anthony G. Pazzanita co-authored (with Tony Hodges) the second edition of the Historical Dictionary of Western Sahara, and also wrote the second edition of the Historical Dictionary of Mauritania.