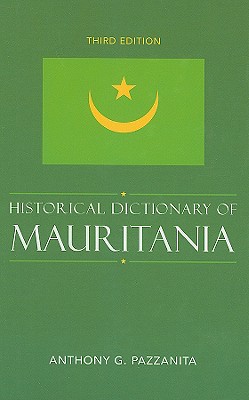 This is book number 110 in the Historical Dictionaries of Africa series.

Mauritania is bordered by Senegal in the south, Mali in the east, Algeria in the far northeast, and the disputed territory of Western Sahara to the north. Comprised mostly of vast stretches of desert, this young country has escaped the ravages of the violent interstate and civil conflicts that have so bedeviled Africa. Mauritanian society possesses ancient antecedents and a universal religious faith that has been practiced over several centuries. These characteristics have given the country a sometimes fragile but relatively resilient sense of national identity, which has survived into the 21st century in the face of powerful political, regional, ethnic/racial, and tribal rivalries since its independence in 1960. An economy largely centered on the export of raw materials, a weak agricultural sector, and a harsh climate in most areas further add to the challenges confronting all Mauritanians. The third edition of the Historical Dictionary of Mauritania--through its chronology, introductory essay, maps, bibliography, and hundreds of cross-referenced dictionary entries on important persons, places, events, institutions, and significant political, economic, social, and cultural aspects--provides an important reference on Mauritania.
Anthony G. Pazzanita co-authored the second edition of the Historical Dictionary of Western Sahara and wrote the second edition of the Historical Dictionary of Mauritania.