Bringing the Body to the Stage and Screen: Expressive Movement for Performers (Hardcover) 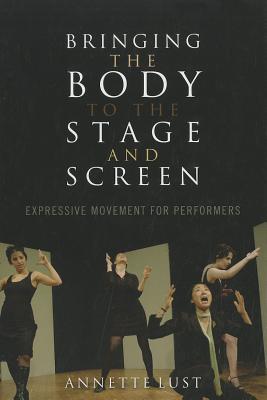 Bringing the Body to the Stage and Screen: Expressive Movement for Performers (Hardcover)


Special Order—Subject to Availability
As stage and screen artists explore new means to enhance their craft, a new wave of interest in expressive movement and physical improvisation has developed. And in order to bring authenticity and believability to a character, it has become increasingly vital for actors to be aware of movement and physical acting. Stage and screen artists must now call upon physical presence, movement on stage, non-verbal interactions, and gestures to fully convey themselves. In Bringing the Body to the Stage and Screen, Annette Lust provides stage and screen artists with a program of physical and related expressive exercises that can empower their art with more creativity. In this book, Lust provides a general introduction to movement, including definitions and differences between movement on the stage and screen, how to conduct a class or learn on one's own, and choosing a movement style. Throughout the book and in the appendixes, Lust incorporates learning programs that cover the use of basic physical and expressive exercises for the entire body. In addition, she provides original solo and group pantomimes; improvisational exercises; examples of plays, fiction, poetry, and songs that may be interpreted with movement; a list of training centers in America and Europe; and an extensive bibliography and videography. With 15 interviews and essays by prominent stage and screen actors, mimes, clowns, dancers, and puppeteers who describe the importance of movement in their art and illustrated with dozens of photos of renowned world companies and artists, Bringing the Body to the Stage and Screen will be a valuable resource for theater teachers and students, as well as anyone engaged in the performing arts.
Annette Lust is the author of From the Greek Mimes to Marcel Marceau and Beyond (Scarecrow, 2002), which was awarded the Choice Outstanding Academic Book in 2000 and was a finalist for the George Freedly Memorial Award in 2001. She is professor emerita at Dominican University of California in San Rafael, California, where she has taught beginning mime, theatre production, and French language and literature.