A Barbarian in Asia (Paperback) 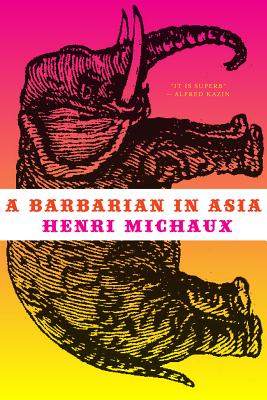 A Barbarian in Asia (Paperback)

Henri Michaux (1899–1984), the great French poet and painter, set out as a young man to see the Far East. Traveling from India to the Himalayas, and on to China and Japan, Michaux voices his vivid impressions, cutting opinions, and curious insights: he has no trouble speaking his mind. Part fanciful travelogue and part exploration of culture, A Barbarian in Asia is presented here in its original translation by Sylvia Beach, the famous American-born bookseller in Paris.

Henri Michaux (1899–1984), born in Belgium, studied mysticism as a young man and traveled throughout South America and Asia before settling in Paris. He wrote more than twenty volumes of poetry and prose and showed paintings he created under the influence of mescaline. In 1965 he was awarded the French National Prize for Letters but refused the award, saying that it threatened his independence.

Founder of the Left Bank bookstore Shakespeare and Co., Sylvia Beach was a luminary in the Parisian literary scene and the first publisher of Ulysses by James Joyce.
Michaux excels in making us feel the strangeness of natural things and the naturalness of strange things.
— André Gide

It is superb in its swift illuminations and its wit.
— Alfred Kazin - The New Yorker

Imagine Arthur Rimbaud carrying his peculiar poetic vision with him to Abyssinia and describing the country, natives and customs for us. Or just fancy Lewis Carroll—with whom Henri Michaux also has something in common—reporting a trip to Africa. In either case the result would be somewhat like this original and stimulating refraction of the Orient through a very special personality.
— Justin O’Brien - The New York Times Book Review