Poems from the Book of Hours (Paperback) 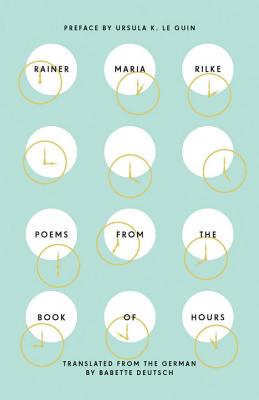 Poems from the Book of Hours (Paperback)

A beautiful bilingual gift book of poems: selections from Rilke’s legendary masterpiece, The Book of Hours, with a new introduction by Ursula K. Le Guin.

Although The Book of Hours is the work of Rilke's youth, it contains the germ of his mature convictions. Written as spontaneously as received prayers, these poems celebrate a God who is not the Creator of the Universe but is rather humanity itself, and, above all, that most intensely conscious part of humanity, the artist. Babette Deutsch's classic translations capture the rich harmony and suggestive imagery of the originals, allowing interpretations both religious and philosophical and transporting the reader to new heights of inspirations and musicality.

Rainer Maria Rilke (1875–1926), the author of Sonnets to Orpheus and Letters to a Young Poet, was one of the greatest poets of the German language.

Babette Deutsch (1859–1982) was a poet, critic, and novelist, as well as a translator.
Rilke made the sturdy sonnet, recast the sonorous song. He quickened the German language itself.
— Rika Lesser - The Nation

If Rilke cut himself shaving, he would bleed poetry.
— Stephen Spender - The New York Review of Books