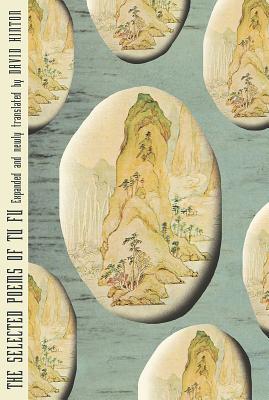 A new and substantially expanded version of Hinton’s landmark translation of Tu Fu, published on the thirtieth anniversary of that original edition

Tu Fu (712–770 C.E.) has for a millennium been widely considered the greatest poet in the Chinese tradition, and Hinton’s original translation played a key role in developing that reputation in America. Most of Tu Fu’s best poems were written in the last decade of his life, as an impoverished refugee fleeing the devastation of civil war. In the midst of these challenges, his always personal poems manage to combine a remarkable range of possibilities: elegant simplicity and great complexity, everyday life and grand historical drama, private philosophical depth and social engagement in a world consumed by war. Through it all, his is a wisdom that can only be called elemental, and his poems sound remarkably contemporary.

Tu Fu (712–770) was a Chinese poet of the Tang Dynasty. His poetry prominently features themes of morality and history, and is known for its adherence to strict structural forms. Tu Fu lived during the devastating An Lushan Rebellion and this experience was reflected in his later work.

DAVID HINTON’s original Selected Poems of Tu Fu was the first full-length verse translation of Tu Fu published in America. The author also of singular books of essays and poetry, Hinton has been awarded a Guggenheim Fellowship, numerous N.E.A. and N.E.H fellowships, both major awards given for poetry translation in the United States, and a lifetime achievement award by The American Academy of Arts and Letters.
Hinton's translation of The Late Poems of Wang An-shih is one of my favorite books of poetry, period, so when I saw that New Directions would be releasing a new edition of Hinton's translations of Tu Fu, I knew I wanted to read it. Tu Fu's poems arrive in soft, elemental couplets, serene and powerful. Hinton's language register is fluid, simple, vivid, and elegant. I also find his language to be remarkably timeless and precise. In "Plum Rains," "All day long, dragons delight: swells coil/and surge into banks, then startle back out"—so visceral and reptilian are these sensations that I imagine sharing the same Autumn rainy sky with Tu Fu. I texted the husband the following couplet from the poem "Out in the Boat," to urge him to take me canoeing before it gets too cold: "Today, my wife and I climb into a little river-boat. Drifting,/skies clear, we watch our kids play in such crystalline water." In the images of this vivid verse, I see Tu Fu's life—as a refugee, as a Buddhist, as a devoted family member.

Hinton’s austerely beautiful translations assume that Chinese classical poetry cannot be severed from philosophy. His translations have always gone against the grain. He has been building, translation by translation, an English language for a Chinese conceptual world. His versions get closest to what makes Du Fu sublime for Chinese readers.
— Madeleine Thien - New York Review of Books

David Hinton is the best English-language translator of classical Chinese poetry we have, and have had for decades. A magician’s grace glows through all of the poems, a grace and ease uncommonly found,uncommonly masterful.
— Citation from the Thornton Wilder Lifetime Achievement Award (American Academy of Arts and Letters)

Tu Fu said ‘A poet's ideas are noble and simple.’ But Tu Fu does not seem so simple to us. His richly-layered work is well represented in these crisp translations. The background notes are invaluable. One of the world's finest poets is made available here.
— Gary Snyder

Tu Fu is the greatest non-epic, non-dramatic poet who has survived in any language.
— Kenneth Rexroth