Public Discourse in America: Conversation and Community in the Twenty-First Century (Paperback) 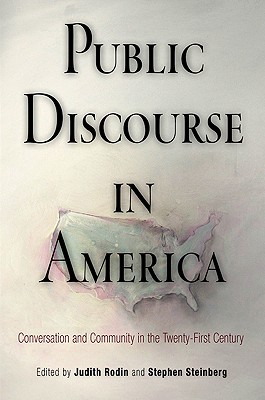 Public Discourse in America: Conversation and Community in the Twenty-First Century (Paperback)

A distinguished group of scholars and prominent figures here offers thoughtful new perspectives on the tenor and conduct of public life in contemporary America. Originating in a shared concern that our civic culture was becoming coarser and more polarized, Public Discourse in America provides a critical corrective to this widespread misperception about declining civility in public culture and the ways we as citizens negotiate our differences.

Together these essays explore the current condition and centrality of public discourse in our democracy, investigating how it has changed through our history and whether it fails to approach our widely held, but often unarticulated, ideal of reasoned and reasonable public deliberation. Contributors consider whether rationality is really the best standard for public discussion and argument, and isolate the features and principles that would characterize a truly exemplary, more productive public discourse at the beginning of the twenty-first century. They investigate why public conversations work when they work well, and why they often fail when we need them the most, as in our nation's so often aborted national conversation on race. Taking a comprehensive look at institutional and leadership practices in recent public debates over a variety of hot button public policy issues, Public Discourse in America outlines how such conversations can be used to reintegrate our fragmented communities and bridge barriers of difference and hostility among communities and individuals. These essays speak to urgent and perennial questions about the nature of American society, the responsibilities of leaders, the rules of democracy, and the role of public culture in times of crisis, conflict, and rapid change. Public Discourse in America originated in the work of the Penn National Commission on Society, Culture, and Community, convened in 1996 by Judith Rodin, President of the University of Pennsylvania. Distinguished members of the Commission, leading experts, commissioned researchers, and leaders in America's nascent public discourse movement offer unexpected insights and an optimistic vision of the health of our politics and culture. Readers--of all political persuasions--from the halls of political power to the streets of urban neighborhoods, from newsrooms and studios to think tanks and universities, will find these essays opening up new paths to robust public discussion, more engaged citizenship, and stronger communities. Contributors include:
Joyce Appleby, Thomas Bender, Derek Bok, Alex Boraine, Graham G. Dodds, Christopher Edley, Jr., Drew Gilpin Faust, Neal Gabler, Richard Lapchick, Don M. Randel, Richard Rodriguez, Jay Rosen, David M. Ryfe, Michael Schudson, Neil Smelser, and Robert H. Wiebe.
Judith Rodin is President of the Rockefeller Foundation and President Emerita of the University of Pennsylvania. She is the author of The University and Urban Revival: Out of the Ivory Tower and Into the Streets, also available from the University of Pennsylvania Press. Stephen P. Steinberg is Advisor to the President at the University of Pennsylvania and former Director of the Penn National Commission on Society, Culture, and Community.