A New World of Labor: The Development of Plantation Slavery in the British Atlantic (Early Modern Americas) (Paperback) 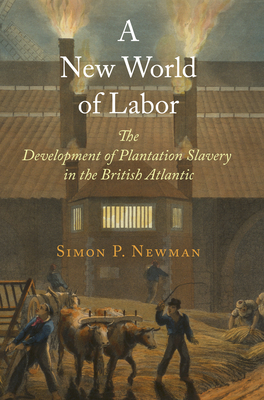 A New World of Labor: The Development of Plantation Slavery in the British Atlantic (Early Modern Americas) (Paperback)

The small and remote island of Barbados seems an unlikely location for the epochal change in labor that overwhelmed it and much of British America in the seventeenth and eighteenth centuries. However, by 1650 it had become the greatest wealth-producing area in the English-speaking world, the center of an exchange of people and goods between the British Isles, the Gold Coast of West Africa, and the New World. By the early seventeenth century, more than half a million enslaved men, women, and children had been transported to the island. In A New World of Labor, Simon P. Newman argues that this exchange stimulated an entirely new system of bound labor.

Free and bound labor were defined and experienced by Britons and Africans across the British Atlantic world in quite different ways. Connecting social developments in seventeenth-century Britain with the British experience of slavery on the West African coast, Newman demonstrates that the brutal white servant regime, rather than the West African institution of slavery, provided the most significant foundation for the violent system of racialized black slavery that developed in Barbados. Class as much as race informed the creation of plantation slavery in Barbados and throughout British America. Enslaved Africans in Barbados were deployed in radically new ways in order to cultivate, process, and manufacture sugar on single, integrated plantations. This Barbadian system informed the development of racial slavery on Jamaica and other Caribbean islands, as well as in South Carolina and then the Deep South of mainland British North America. Drawing on British and West African precedents, and then radically reshaping them, Barbados planters invented a new world of labor.
Simon P. Newman is Sir Denis Brogan Professor of American History at the University of Glasgow and author of Parades and the Politics of the Street: Festive Culture in the Early American Republic and Embodied History: The Lives of the Poor in Early Philadelphia, both available from the University of Pennsylvania Press.