Dangerous Minds: Nietzsche, Heidegger, and the Return of the Far Right (Hardcover) 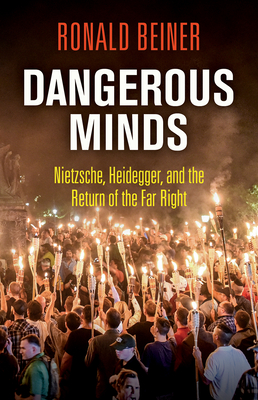 Dangerous Minds: Nietzsche, Heidegger, and the Return of the Far Right (Hardcover)

Following the fall of the Berlin Wall and demise of the Soviet Union, prominent Western thinkers began to suggest that liberal democracy had triumphed decisively on the world stage. Having banished fascism in World War II, liberalism had now buried communism, and the result would be an end of major ideological conflicts, as liberal norms and institutions spread to every corner of the globe. With the Brexit vote in Great Britain, the resurgence of right-wing populist parties across the European continent, and the surprising ascent of Donald Trump to the American presidency, such hopes have begun to seem hopelessly na ve. The far right is back, and serious rethinking is in order.

In Dangerous Minds, Ronald Beiner traces the deepest philosophical roots of such right-wing ideologues as Richard Spencer, Aleksandr Dugin, and Steve Bannon to the writings of Nietzsche and Heidegger--and specifically to the aspects of their thought that express revulsion for the liberal-democratic view of life. Beiner contends that Nietzsche's hatred and critique of bourgeois, egalitarian societies has engendered new disciples on the populist right who threaten to overturn the modern liberal consensus. Heidegger, no less than Nietzsche, thoroughly rejected the moral and political values that arose during the Enlightenment and came to power in the wake of the French Revolution. Understanding Heideggerian dissatisfaction with modernity, and how it functions as a philosophical magnet for those most profoundly alienated from the reigning liberal-democratic order, Beiner argues, will give us insight into the recent and unexpected return of the far right. Beiner does not deny that Nietzsche and Heidegger are important thinkers; nor does he seek to expel them from the history of philosophy. But he does advocate that we rigorously engage with their influential thought in light of current events--and he suggests that we place their severe critique of modern liberal ideals at the center of this engagement.
Ronald Beiner is Professor of Political Science at the University of Toronto and author of numerous books, including Political Philosophy: What It Is and Why It Matters and Civil Religion: A Dialogue in the History of Political Philosophy.